The management has constituted an experienced offline team, in addition to the online borrower acquisition channels, to drive customer growth

360 DigiTech (NASDAQ: QFIN) has set new records in its earnings and top-line performance consistently in the recent quarters and the online consumer finance firm looks poised to repeat that this year, thanks to the stable demand for consumer credit and effective cost management. Reflecting the strong revenue growth and lower operating costs, earnings more than doubled to a new high in the most recent quarter. The market responded positively to that and the company’s stock reached a new peak last week, before retreating to the pre-earnings levels.

A key strategy that is estimated to have contributed to business growth is diversification of the customer base. In an interview with AlphaStreet, chief financial officer Alex Xu said the management has set up an experienced offline team, in addition to the online customer acquisition channels, which accounted for about 15% of the transactions of new customers last year. 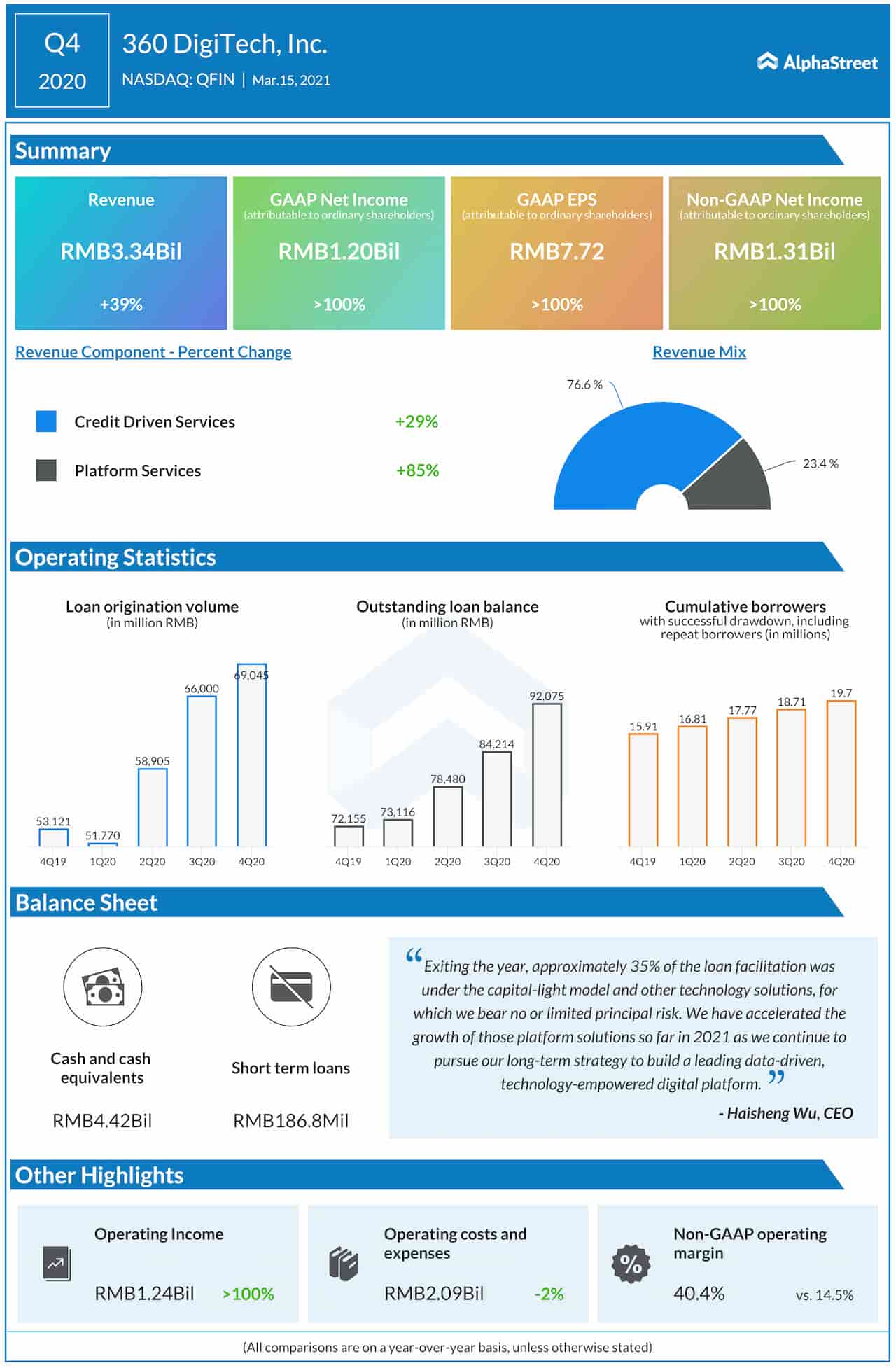 “For SME lendings, we have developed three customer acquisition channels including through SaaS service partners, offline customer reach, and online traffic acquisition. So far, we have covered around 20 leading SaaS service providers. On the consumer finance side, apart from V-pocket, our virtual credit card product, we are on the fast track of ’embedded finance’, being the partner for leading consumption traffic platforms in China,” said Xu.

As far as its growth strategy is concerned, the company is quite bullish on the recent foray into SME financing, though it is an area where conventional banks enjoy a strong foothold. Xu believes SME lending is the new growth engine for financial technology providers, despite the presence of big players. According to him, it is a huge market where around 50% of the demand remains unmet.

So there’s enough room for us to grow and prosper. And secondly, with a deep-rooted partnership with KCB, we become one of the very few players that are capable of serving this market on a large scale. Thirdly, we have developed several channels to build up our SME business and we believe we’ll gradually stand out in the market.

Customer acquisition and SME expansion would be the priority areas for capital spending going forward. The progressive improvement in cash flow should help the company meet its investment goals this year and beyond. The management is also pursuing equity investments in high-growth targets and entities with great potential synergies.

“The third aspect of cash use is relating to the license. There might be capital rejection into our micro-lending license or guarantor license, as well as we may consider repurchasing more licenses. We believe that sufficient cash position will not only enable us to compete in an ever-changing market but also position us to capture the potential growth opportunity in the market recovery.,” Xu concluded.

In China’s rapidly changing regulatory environment, the CBIRC’s new stipulation on joint lending and micro-lending is eliciting mixed reactions from the market. Since 360 DigiTech’s exposure to that segment is relatively low, the company’s leadership does not see the guidelines having a significant impact on the business.

In the fourth quarter, revenues jumped 39% to RMB3.34 billion, aided by strong contributions from both Credit Driven Services and Platform Services. At RMB1.31 billion, adjusted earnings were about double that of the prior-year number. Encouragingly, more than a third of the loan facilitations were under the capital-light model, for which the company bears a minimal risk.