A decade since 2008 financial crisis, most Americans haven’t recovered

September 15, 2018, marked a decade since the fall of Lehman Brothers, triggering a nightmare that lasted over two years. Since that fall, various financial institutions and the White House have fought valiantly to lead the country into an economic recovery.

Today, the stock markets are trading at record highs, and the unemployment rates have touched a multi-decade low. US household worth has also breached $100 trillion, higher than ever in history. But has the economic recovery been truly so impeccable? Or is it just a mirage? 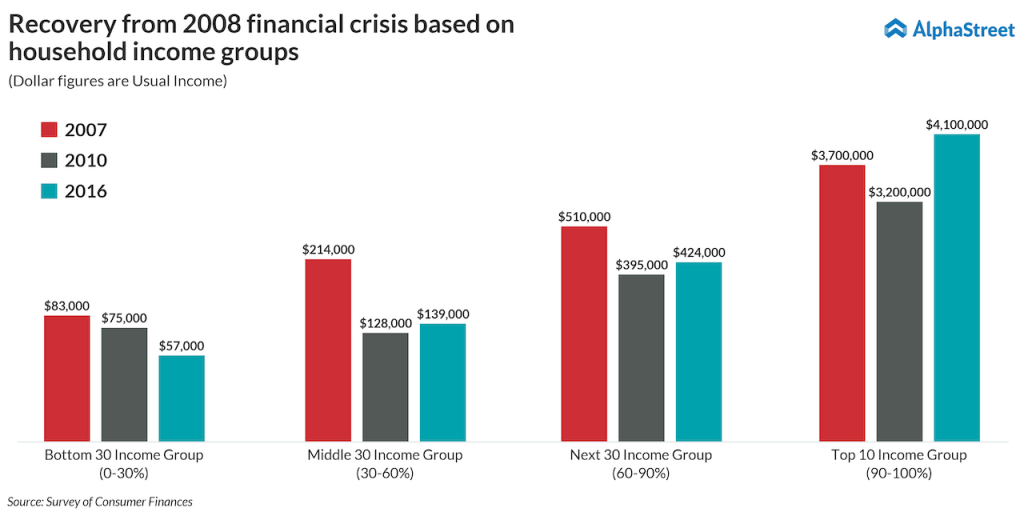 While it is true that collectively Americans are today wealthier than they were before the financial crisis, a closer look at the different income groups reveals that most of the recovery was driven by the top 10% wealth class. The rest of the group is, in fact, poorer than what they were in 2007, according to the Federal Reserve’s Survey of Consumer Finances report.

The lower 90% was more affected primarily because over a third of their worth was attributable to their primary residence. When house prices fell as much as 23% during the crisis, it broke these households as well. Though their stake in the stock market was less than the top 10% income group, it was still a non-negligible portion of their income. Hence a 21% stock crash added to the financial woes of most American families.

The top 10% remained more insulted by the events of 2008 as almost two-thirds of their wealth was stashed in other assets.

US job openings reach record high along with quits rate

Meanwhile, recovery has also been weak among the poorer households as seen from the chart. Though home prices have shot up 27% since their lowest levels and stock prices have soared 160%, the low-income groups have not been able to exploit this growth. This was due to a decline in home-buying in this group spurred by a cut down in the mortgage credit availability.

Participation in stock investment also dwindled among the bottom 90% due to higher unemployment rates, taking away a key opportunity to regain the lost wealth.

Other recent studies have shown that asset ownership has hardly increased among the bottom 90% households even in 2018, which would mean, the negative impact of the financial crisis and the income inequality will continue to haunt them during the years to come. The ghost of the Great Recession hasn’t left its marks after all.