A ride through unfamiliar terrains: The US automobile sector

On long distance rides, crossroads require caution as they test our judgement. And when we are talking of the US automobile sector in the beginning of 2018, we are referring to a somewhat similar scenario – the only difference being that we are not at a crossroad, but the gateway to a labyrinthine section of the highway.

Let’s start with a disclaimer – this report might enliven the motor enthusiast in you, but not so much the trader.

Fast forward a decade and the Toyota Camry that you are riding today could be analogized to horses and mules. Major automobile manufacturers have already embraced the concept of electric cars, shelling out a major chunk of its revenue into the R&D of new models. Industry pioneer Tesla is burning its reserves like the wildfire in California. 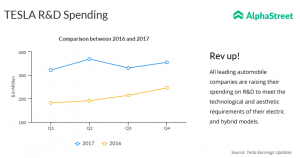 So where does our problem start? From a plain view, the auto industry is doing just great. 2016 had been an exceptional year, with new car and truck sales in the US hitting an all-time record of 17.55 million units. Analysts estimate a sales dip to 17.1 million units in 2017, and a further minor dip in 2018. However, considering the fact that the comparisons are made with a record-breaking year, the numbers are not so disquieting.

We find the real problems once we go deep into the industry. As mentioned earlier, automakers have already entered into a fray to develop the next generation of vehicles with a slew of smart features including self-drive, AR displays and Ironman-ish electronics. It is estimated that the upgrades would cost around a fifth of the vehicle’s total value in the next five years.

Automakers have already entered into a fray to develop the next generation of vehicles with a slew of smart features including self-drive, AR displays and Ironman-ish electronics.

Of course, auto giants such as GM and Ford are currently in a stable position to meet the expenses and still fund shareholder returns. But the industry is highly cyclical in nature and also prone to one-off costs due to recalls. The year 2016 saw a record number of recalls of 53.2 million vehicles in the US, as per data from the Transportation Department. The numbers are expected to be pretty high in 2017 as well, though official data is not yet available.

Adding to these factors is a saturated market, where companies managed to move their products in 2017 by offering massive discounts. Incentives were as high as 10.8% of the recommended price, a critical level in the industry, spurred by an excess supply of almost new vehicles in the market. Once hit with a crisis, whether the companies will be in a position to fund shareholder returns is to be mulled.

Electric Vehicles (EV) currently constitute only about 1% of the total vehicles sold in the US. Hence there is a long way to go, when expenses are concerned. 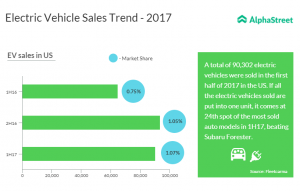 Unlike the US, China has been extremely receptive towards developing EV technology in the country. But there is one catch. Foreign makers have to either create a partnership with a local player, or suffer a steep 25% tariff. A partnership would mean sharing technology and revenues with a potential rival in the country.

Volvo, which almost became bankrupt back in 2010, has however identified this offer as an avenue into the key strategic market. Along with its local partner Geely Automobile Holdings, the Swedish automaker has committed to a complete shift towards EVs by 2019. Tesla has also set up a manufacturing facility in Shanghai, however, suffering the 25% tariff disadvantage. 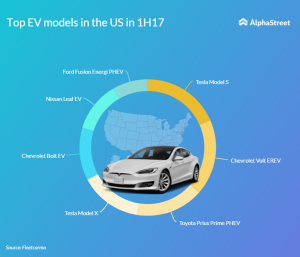 Last September, China announced new regulations, so that EVs account for at least 8% of the total automobile sales in the country.

NAFTA and other challenges

The scene has not been so encouraging back home, where automakers are grappling to meet the ever increasing safety and environmental regulations. Adding to these are the hiccups related to tax reforms. The House and Senate continue to be on different grounds over the elimination of federal EV credit of $7500. The changes proposed by President Donald Trump to NAFTA (North American Free Trade Agreement) are also likely to upset carmakers, who have adjusted with the current taxation rules.

Experts feel that an increase in the Rule of Origin from 62% of car parts to 85% would lead to price hike of vehicles, and threaten the companies’ competitiveness in other markets. 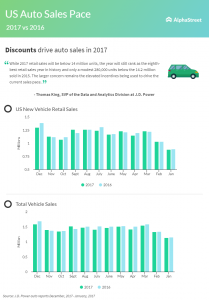 The year 2018 is shrouded with a lot of unpredictability for the automobile sector, thanks to competition in the EV segment, rising expenses, change in consumer trends and regulatory uncertainties. This is not a great sign for investors, and hence you should take a call based on your risk appetite.