Advanced Micro Devices (AMD) is slated to release its fourth quarter and full-year 2018 results on Tuesday, January 29 after the bell. Analysts estimate the semiconductor giant to earn $0.08 per share on revenue of $1.45 billion, representing a flat earnings growth and a 2% decline in revenue compared to the prior year quarter. The company had surpassed Street’s earnings views for the first three quarters of fiscal 2018.

Here is a quick look of the Advanced Micro Devices third quarter results: 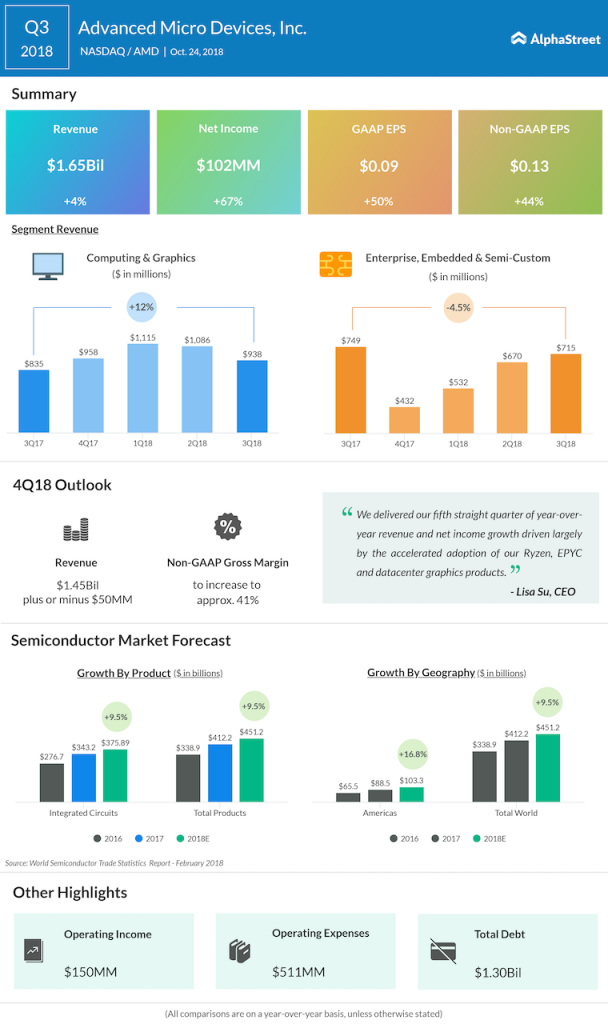 AMD had guided revenue to come in about $1.45 billion, plus or minus $50 million for the fourth quarter. In the third quarter, the chipmaker topped the bottom line estimates and failed to meet the topline targets. Earnings rose 44% to 13 cents per share and revenue grew 4% to $1.65 billion for the quarter ended September 29, 2018.

For the December quarter, AMD’s graphics revenue might once again decline as it faces heavy completion from Nvidia (NVDA). However, AMD’s processor sales are expected to grow, helped by the ramp in Ryzen and EPYC processors.

In November 2018, AMD announced its partnership with Amazon (AMZN) and said that Amazon Web Services (AWS) will use the former’s EPYC chips. AMD, which celebrates its 50th anniversary this year, said in CES that Microsoft’ (MSFT) Azure also uses the company’s EPYC processors.

All the companies in the Philadelphia Semiconductor Index traded in the positive territory during Friday’s trading session except Intel (INTC), which fell about 6% on Friday as it missed Street’s views on the revenue front and guided below the expectations.

Shares of Lyft Inc. (NASDAQ: LYFT) were up 8% in afternoon hours on Wednesday. The stock has gained 53% over the past 12 months and 25% since the beginning of

Department store chain Target Corp. (NYSE: TGT), which has been thriving on the pandemic-driven shopping boom since early last year, maintained its strong performance during the holiday season and entered