After misinformation crackdown, Twitter (TWTR) sees a strong year ahead

To increase capital expenditure this year to support the growing user base, with focus on raising headcount

Last year, intense regulatory scrutiny bought the social networking market into the spotlight, adding to the chaos created by the pandemic. After ending the year on a positive note, micro-blogging site Twitter, Inc. (NYSE: TWTR) is set to continue its cleanup initiatives and strengthen the platform.

The company published one of the much-awaited earnings reports this week – the first after banning former president Donald Trump from the platform in an unprecedented move. Interestingly, a significant number of new users joined Twitter in recent months, underscoring its growing popularity. CEO Jack Dorsey is bullish about the future prospects, especially in terms of adding and retaining users.

In what could be a sign that Dorsey’s sentiment resonates with the market, Twitter shares gained soon after the earnings release, with investors responding favorably to the stronger-than-expected outcome. But the general weakness in financial performance during the pandemic and underlying market uncertainty remains a concern, and experts see the stock dropping in the low-single digits this year. Since the next quarterly report is expected to be crucial for the company, it makes sense to wait until then before investing. Nevertheless, the stock remains an attractive bet for those looking for long-term engagement. 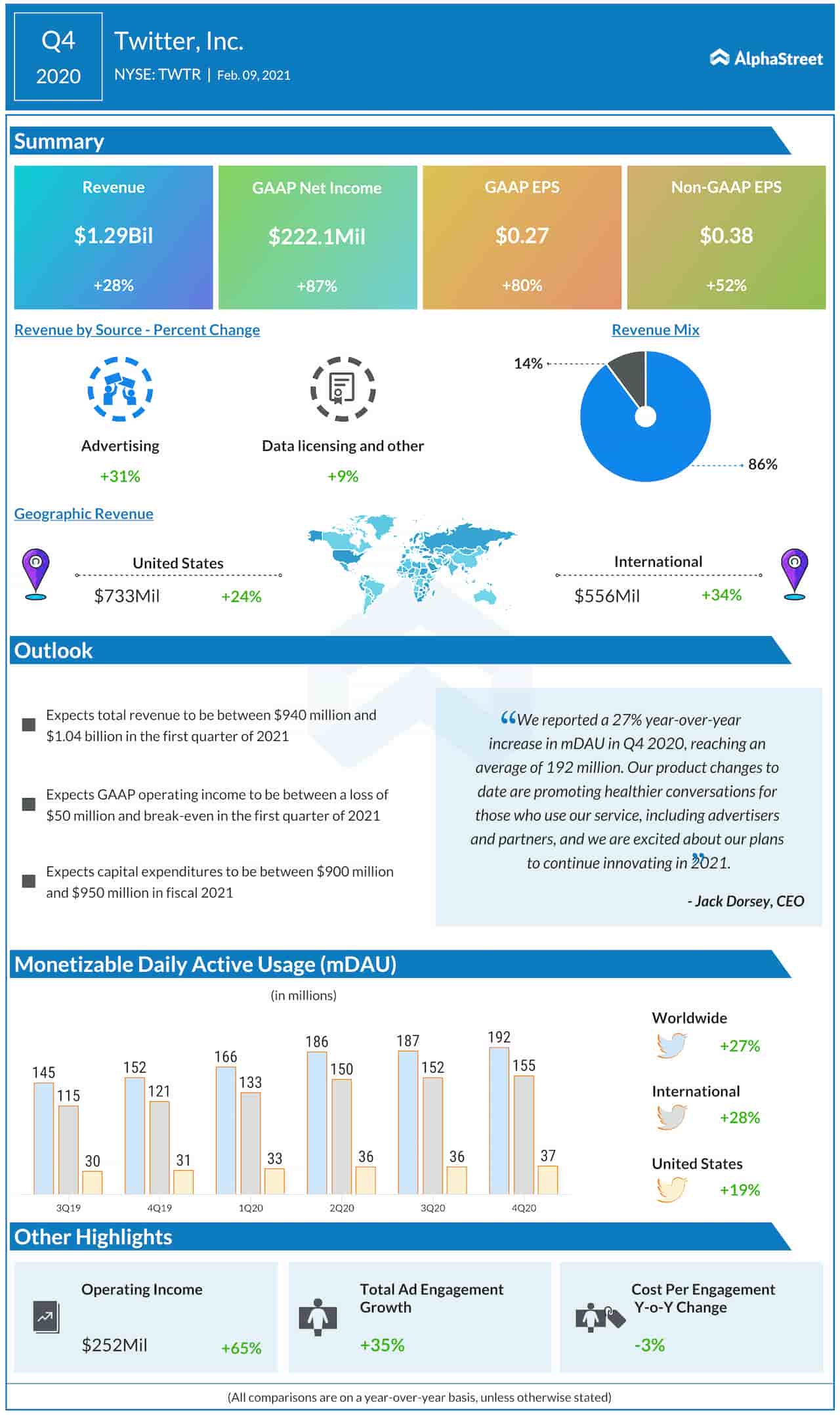 Though traffic remained largely unaffected by the virus crisis last year, the company’s earnings missed the Street view in two out of the previous four quarters. It ended fiscal 2020 on a high note, with fourth-quarter earnings growing in double-digits and surpassing expectations. It was driven by a 28% increase in revenues to $1.29 billion, reflecting the continued expansion of the advertising business. Buoyed by the strong outcome, the management expects the top-line to be close to the $1-billion mark in the first quarter.

We made significant progress with new ad formats, stronger attribution, and improved targeting in Q4. And that momentum continues in Q1 with the launch of our rebuilt MAP offering and website clicks objective. These improvements allow us to serve DR advertisers of all sizes with better performance and put us in a much stronger position to drive accelerating revenue growth in 2021 and beyond… Looking ahead, we have a strong product road map designed to deliver even more daily utility for new and existing customers.

While user growth missed the forecast in the December-quarter, new additions are expected to accelerate in the coming months – probably more than what the market projects. And, there is going to be a corresponding increase in headcount, which will add to the cost pressure and impact the bottom-line. Taking forward its growth strategy, the management plans to raise capital spending to support the growing user base and boost advertising. The outlook assumes significance against the backdrop of the ban imposed on Trump after the ex-president allegedly misused the platform for political gains.

After the earnings release, shares of the company climbed to a new high this week and maintained the momentum since then. At slightly above $65, the stock traded up 8% on Wednesday afternoon, after gaining 20% since the beginning of the year.