Alphabet Inc. (NASDAQ: GOOGL) is scheduled to report third quarter 2019 earnings results on Monday, October 28, after the market closes. The search giant is operating in an environment of increased regulatory scrutiny, anti-trust probes and speculations of breaking up big tech companies. Despite these challenges, Alphabet is expected to hold its ground and report higher revenues for the quarter. Here are the key metrics to watch:

Analysts expect the company to report revenues of $40.3 billion for Q3 2019, reflecting an increase of 19% from the prior-year period. Revenues are expected to benefit from strength in advertising as well as cloud computing. In the second quarter of 2019, revenues grew 19% to $38.9 billion, beating estimates. 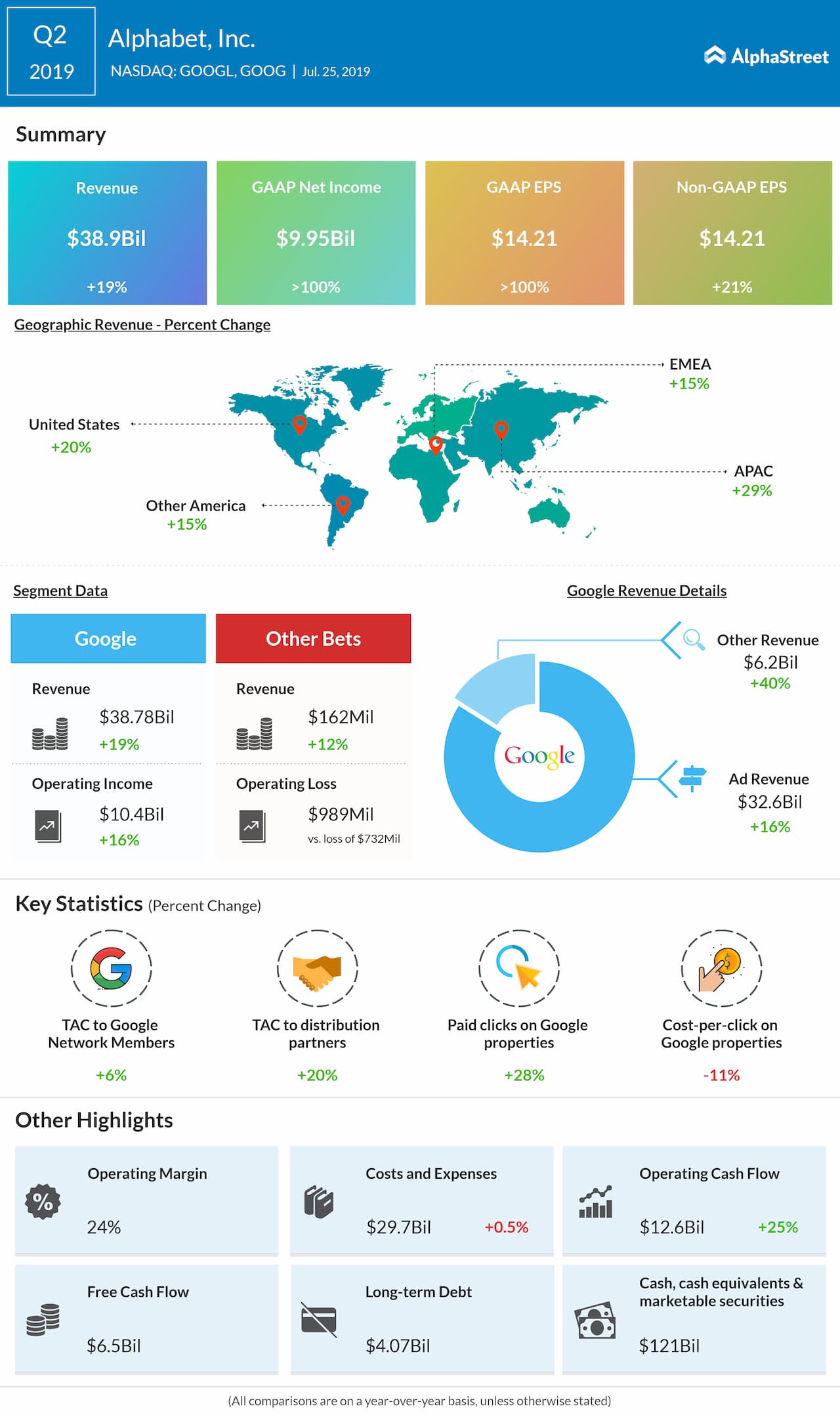 Earnings are estimated to be $12.38 per share. This compares to $13.06 per share in the year-ago period. Alphabet’s subsidiary Google faces several lawsuits related to privacy and data collection. The bottom-line numbers could be negatively impacted by penalties and settlements related to these legal issues. Last quarter, adjusted EPS grew 21% to $14.21, topping forecasts.

The majority of Alphabet’s revenue comes from advertising. In the second quarter, the company managed to reverse the deceleration trend that it had been witnessing in its ad revenue and posted a higher year-over-year growth of 16%. Within advertising, the focus will be on metrics such as paid clicks and cost-per clicks. The company faces stiff competition in the advertising space from rivals like Amazon (NYSE: AMZN).

This division tracks the revenues from hardware and services such as Google Cloud, Google Play Store and Google Home. Last quarter, other revenues jumped 40% year-over-year to $6.18 billion. The company is seeing significant growth in its cloud segment but it still lags behind its competitor Microsoft (NASDAQ: MSFT) in the cloud computing space.

The Other Bets segment includes investments in ventures such as its autonomous driving unit Waymo and life sciences unit Verily. Last quarter, revenue in this division grew 11% to $162 million. It will be interesting to watch for updates on the progress the company is making with these projects as several of them have the potential to drive significant growth in the future.

Shares of Alphabet have gained nearly 12% year-to-date. The company has a strong Buy rating and an average price target of $1,427.66.

Broadcom (NASDAQ: AVGO) reported non-GAAP EPS of $5.14 for the second quarter of 2020 on revenue of $5.74 billion. While the earnings came in line with the analysts' estimates, revenue

Will Zoom (ZM) keep up the booming trend?

Video conferencing platforms and other workplace collaboration tools have become more popular nowadays. With most people confined to their homes, apps that allow us to stay in touch have become

Cloudera (NYSE: CLDR) once again proved its mettle by reporting impressive results for the April-quarter that was mostly marred by the market-turmoil spurred by the virus attack. Though the tech