Amarin Corporation (AMRN) is scheduled to report earnings results for the fourth quarter of 2018 on Wednesday, February 27, before the market opens. Analysts expect the company to report a loss of $0.08 per share on revenues of $74.4 million for the recently ended quarter.

Amarin has a mixed track record in terms of meeting earnings estimates and over the past four quarters, the company has missed expectations twice. The company’s primary product, Vascepa, has grown consistently over the past nine months and this momentum will continue in the fourth quarter as well. New approvals might also help in driving sales growth going forward.

In November, Amarin published positive results pertaining to the REDUCE-IT study, which evaluated the cardiovascular risk reduction potential of Vascepa, thereby giving the company potential for significant benefits through the affordably-priced drug. However, higher costs are likely to hurt Amarin in the fourth quarter as the company continues to implement strategic initiatives for business growth. 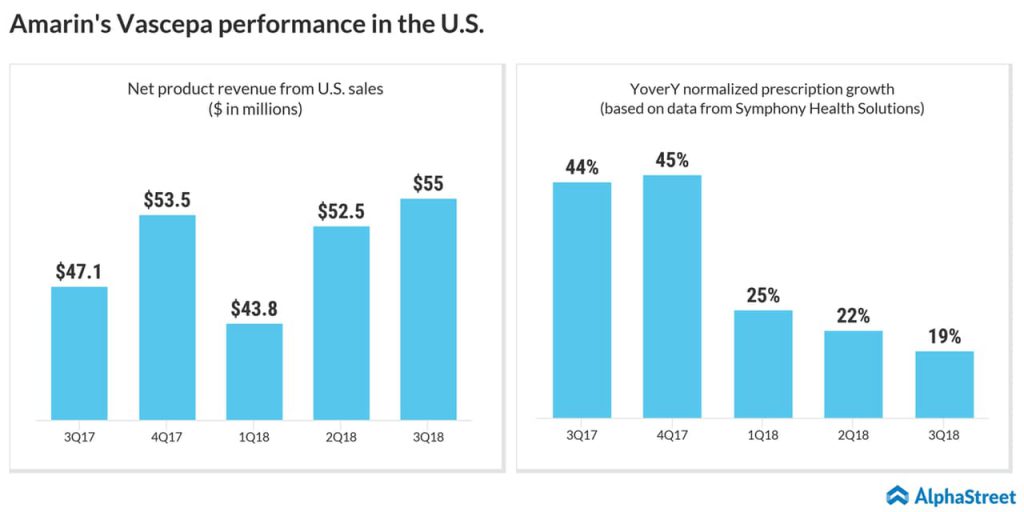 Last month, Amarin published preliminary results for 2018 and provided its outlook for 2019. The company expects record revenues for the fourth quarter and full year of 2018 in the ranges of $72 million to $76 million and $224 million to 228 million, respectively. The full-year results represent an increase of 24-26% over 2017.

The quarterly and full-year revenue numbers predominantly reflect US sales driven by increased prescriptions for Vascepa. For 2019, Amarin expects total revenue of about $350 million, reflecting an increase of more than 50% from 2018, mostly from US sales of Vascepa.

Amarin’s stock gained 14% on Friday on rumors that Novartis (NVS) might be interested in an acquisition. However, Novartis declined to offer any comment on the issue. Similarly, last month, Amarin’s stock surged on rumors that Pfizer (PFE) was looking to acquire the company. There have been no further reports on the outcome of this matter.

The majority of analysts have rated Amarin as a Strong Buy while none have rated it Sell. Over the past six months, the stock has gained 588% while over the past month, it has climbed 7%. The stock was down 3.6% in morning hours on Monday.

Shares of Yelp (NYSE: YELP) were down over 15% on Friday, a day after the company reported a decline in revenue along with a net loss for the second quarter

The US economy added 1.8 million jobs in July, marking the third consecutive month of employment growth as the country recovers from the coronavirus pandemic that has caused widespread disruption.

Yelp (NYSE: YELP) reported second-quarter financial results after the regular trading hours on Thursday. The results were better than what the street had anticipated. YELP shares rose 4% immediately following the