Earnings Preview: No major surprises in store from Coca-Cola in Q1

Coca-Cola (KO) is scheduled to report its Q1 2019 results tomorrow before the bell. The beverage giant is kick-starting the fiscal 2019 period on a muted note. Investors would not be expecting too many surprises in the first quarter as the company has already provided a cautious outlook for the year, due to weak macros.

Demand for core soft drinks has been decreasing due to changing consumer trends as the consumers shift towards healthier options. In order to address this issue, Coca-Cola has been buying last year in the niche beverage domain which would help it to bolster growth. This is expected to act as a tailwind in 2019.

For the first quarter, analysts expect a modest decline in earnings of $0.46 per share over $0.47 reported last year and sales to come in at $7.89 billion, an increase of 3.5%. Despite weak macros and multiple headwinds, Coca-Cola’s cost-saving initiatives and recent acquisitions would help the firm to report results in line with estimates.

For the fiscal 2019 period, Coca-Cola expects a 4% jump in adjusted revenues. On a Non-GAAP basis, the beverage giant expects operating income on an FX-neutral basis to grow 10% to 11%. Operating cash flow is expected to come in at least $8 billion while CapEx for the year is forecasted about $2 billion excluding discontinued operations.

However, the company added that EPS would be up or down 1%, which failed to impress the street. As a result, the stock tumbled more than 8% recording the biggest intra-day losses in recent times due to weak earnings outlook. Analysts now have scaled down their estimates for the 2019 period and are expecting EPS of $2.09.

In the fourth quarter, revenue decreased 6% to $7.06 billion, while Coca-Cola reported a profit of $870 million compared to a loss of $2.75 billion last year. Net income from continuing operations was $0.18 per diluted share over a loss of $0.66 a share a year ago. Q4 results came in line with market estimates. 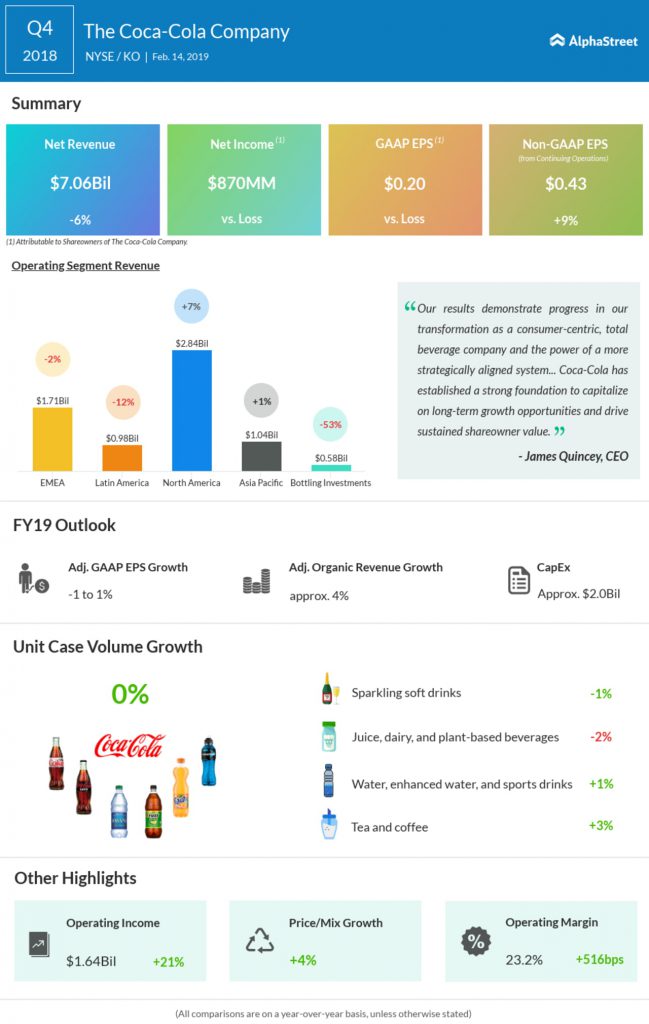