Rovio Entertainment, the force behind the ever-so-popular Angry Birds game, is however losing its popularity among investors.  This comes after the company missed its sales expectations in its fourth quarter and also offered a weak guidance for 2018.

The Finnish company had an eventful journey, enjoying early success due to its dominant Angry Birds game. With a promising start, the company had listed itself on the Nasdaq Helsinki exchange last September. But the success of IPO was short-lived for Rovio, which was once a major player in the mobile gaming industry. 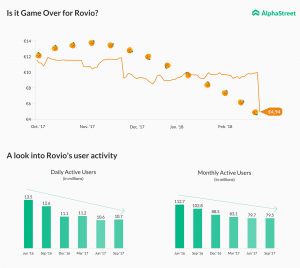 On Thursday, the company witnessed a horrific drop in its shares after it stated that the 2018 revenue may differ from the market expectations and its adjusted profit is expected to only 9-11% of its sales. It expects its sales in 2018 to be around 260-300 million euros compared to 297 million in the prior year. The outlook disappointed investors, which in turn led to a 40% drop in its shares, the worst selloff since IPO.

The company witnessed a horrific drop in its shares after it stated that the 2018 revenue may differ from the market expectations and its adjusted profit is expected to only 9-11% of its sales.

Under the leadership of Kati Levoranta, Rovio had managed to diversify its business. But slowly, the company started struggling to generate revenue from its diversified business, though Angry Birds continued to boost profits. Investors, who were eager to own a share of the company, feel misled as the company failed to move beyond Angry Birds.

Investors are dumping the stocks as Rovio miserably failed to replicate a similar success like that of Angry Birds and have painted a bleak future for the company. The biggest challenge for the company is to lure new players to its board, because a large chunk of its users have moved on to some other alternates.

The competition in the gaming industry is getting tough. Rovio needs to give investors some assurance that it can make the company grow and multiply its business in this industry. Rovio needs to put on the thinking cap and offer their players something new that would persuade them to stick with it.