DBX Stock: Why is it worth keeping Dropbox on your watchlist

Dropbox, Inc. (NASDAQ: DBX) had a strong start to the new fiscal year and it seems everything is working in the file-sharing company’s favor, except the performance of its stock. When the market selloff battered Wall Street recently, Dropbox was not spared.

DBX lost about 24% since last year but the stock has what it takes to shrug off the weakness and return to the record highs seen a few years ago. As evidenced by the authorization of a major share buyback program recently, the management remains committed to enhancing shareholder value. Dropbox’s valuation is very low in relation to its impressive financial results – a market capitalization of around $8 billion and free cash flow of about $700 million since last year.

The San Francisco-based company enjoys the rare distinction of beating earnings and revenue forecasts in almost every quarter over the years. The overall performance was not affected by the macro headwinds. Rather, the company benefitted from the high demand for digital services during the pandemic, a trend it expects to continue and drive growth in the long term.

The momentum is unlikely to weaken in the near future because customers’ response to recent efforts to enhance the platform has been quite encouraging. The initiatives allow easier onboarding of new team members, improved mobile experience, and convenient editing facilities. It complements the transformation brought about by the acquisition of document sharing platforms DocSend and HelloSign in recent years, with the aim of helping customers manage end-to-end document workflows with ease. 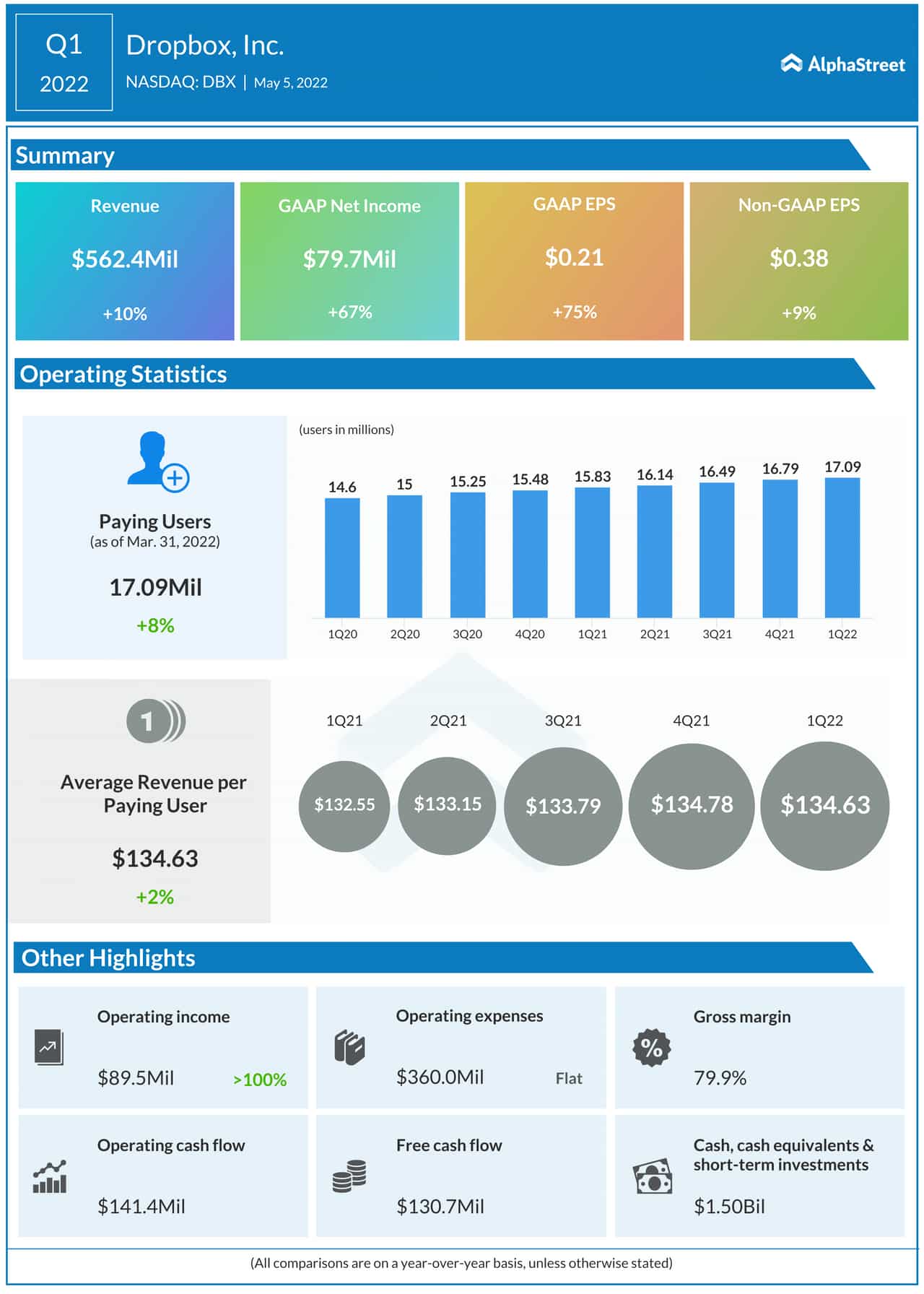 The top line and net profit exceeded estimates in the first quarter, though by a thin margin. At 17.09 million, the number of paying users was up 8% in the March quarter, while revenue-per-user rose modestly to $134.63. Revenues grew by 10% to $562.4 million, which translated into a similar increase in adjusted earnings to $0.38 per share.

“I believe the rise of remote work will be the best thing to happen to knowledge work in generations, but it requires a complete rethinking of the office, the workweek, and the technology that we use to get our work done. Dropbox is taking the lead here with our Virtual First strategy. In Q1, we reopened our U.S. studios, allowing us to finally experience Virtual First as it was originally intended,” said Dropbox’s CEO Andrew Houston at the first-quarter earnings call.

Meanwhile, it has not been a smooth ride for Dropbox as it faces stiff competition – especially in the content collaboration segment. The company has been successful in safeguarding market share from bigger players like Google Drive and Microsoft Corp’s (NASDAQ: MSFT) OneDrive, which offer feature-rich packages to customers at affordable rates.

Dropbox’s stock experienced high volatility this year and is currently trading below its long-term average. The stock continued the downturn after this month’s mixed earnings that failed to impress investors. It closed the last trading session lower and suffered further losses in pre-market trading on Tuesday.