Teva Pharmaceutical Industries Ltd. (TEVA) is scheduled to post its third-quarter 2018 earnings on Nov 1, before the opening bell. So, what is in store for the generic drugmaker’s shares that have moved 4% up this year vs. the industry’s 5.8% dip?

Teva is in a good place now, since it beat expectations in three of the past four quarters. A year ago, the pharma giant announced that it stopped announcing results as two business units, generics and specialty medicines, and instead, post it under regions — North America (United States and Canada), Europe and International Markets.

Lower sales of multiple sclerosis drug Copaxone and the dip in US generics market is expected to hurt North America sales in the third quarter. In the last earnings call, Teva hinted that Copaxone sales would decline sharply in the second half on additional pricing pressure and the expected uptake of a generic version.

Teva’s largest product, Concerta, is not doing well too due to the authorized generic hurting sales in the quarter. Last quarter, sales of Bendeka, Treanda, ProAir and Qvar also declined, so investors will be on the lookout for any improvements in the current quarter. 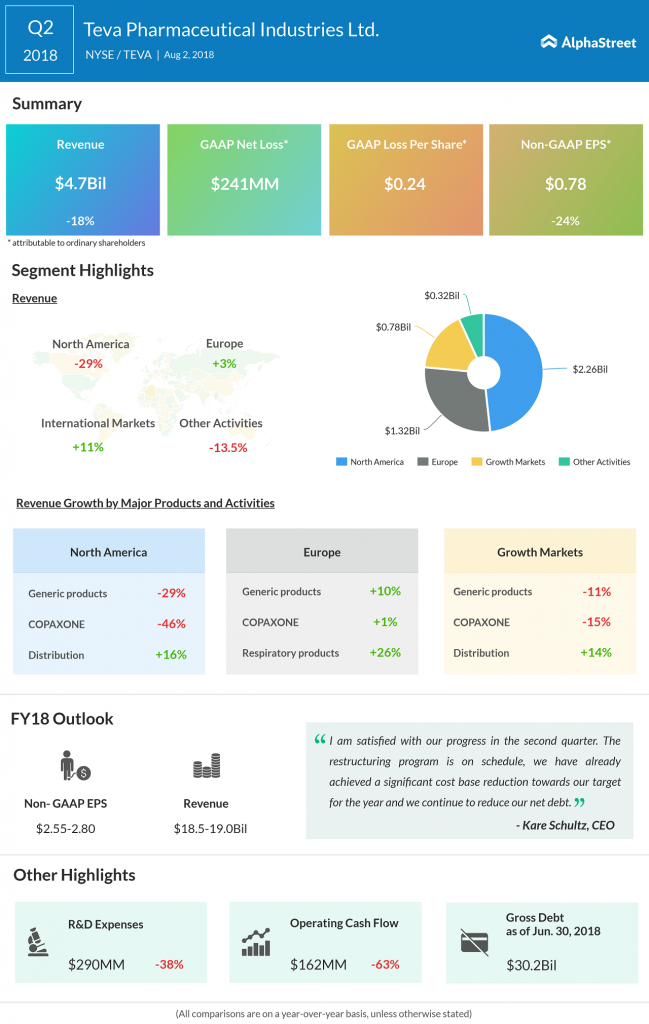 Investors would also be keen to know Teva’s plans for its newly approved anti-calcitonin gene-related peptide drug, Ajovy (fremanezumab) injection. The way Teva plans to launch this preventive treatment of migraine might tip the scales against Amgen and Lilly’s LLY CGRPs, and also help investors back the stock more.

Cost savings from Teva’s aggressive restructuring initiatives announced last year are likely to provide some support to the bottom line. Teva has a new organizational structure in place, is closing plants, cutting down its generics portfolio, divesting non-core assets, eliminating low-value R&D projects, and is significantly cutting its global workforce. Teva expects to save almost $3 billion by the end of 2019 from these initiatives. An update is expected on the re-structuring plan on the third-quarter call.

New drug sales power Amgen’s Q2 earnings
Amgen (AMGN) posted better-than-expected second-quarter results – amidst fierce competition and growing concerns from the public to make drugs affordable. Shares of Amgen rose above 1% in the after-hours trading on Oct 30. With the recent launch of new products, sales improved 4% to $6.05 billion while profits jumped 17% touching $3.83 per share due to strong product sales. Free cash flow for the quarter came in at $1.9 billion, down 9.5% compared to last year due to increased tax outgo. Selling, General & Administrative expenses increased 12% due to product launches and increased marketing costs.

Results from FDA approval
The FDA, back in August, had approved Teva’s generic version of EpiPen and EpiPen Jr auto-injector for the emergency treatment of allergic reactions in adults and pediatric patients who weigh more than 33 pounds.

Teva’s generic version was to compete with EpiPen maker Mylan (MYL), which has got its own authorized version of the auto-injector and accused of its monopoly in this area. Teva shares rose more than 5% on August 16 after the FDA’s approval, while Mylan stock dropped about 1%.

Earlier in 2016, the Israel-based pharma firm’s EpiPen generic version application was rejected by FDA. The EpiPen is intended to automatically inject a dose of epinephrine into a person’s thigh to stop an allergic reaction. The FDA has approved several epinephrine auto-injector products under new drug applications to treat life-threatening allergic reactions, including EpiPen, Adrenaclick, and Auvi-Q, which are not considered as generics.

Two months ago, investor Warren Buffett inched up his stake in Teva Pharma to 43.2 million shares from 40.5 million shares at the end of March. At the same time, Cantor Fitzgerald analyst Louise Chen maintained his ‘Hold’ rating on Teva shares and set a price target of $25, while Mizuho Securities reiterated its ‘Buy’ rating with a price target of $28. All this goes to show a mixed bag, and that is what is to be expected of Teva this quarter as well.