Investing in pot stocks 101: Here’s what you should know

Marijuana-based stocks are all the rage in the market now. They have even managed to hog the limelight from heavyweight gaming stocks fresh out of the holiday season.

But with so many new ones cropping up, what would you pick to invest smartly? The choice is up to you, but we hope this helps you make an informed choice.

When we say pot stocks, Canadian cannabis giant Tilray (TLRY) comes to mind first. With it scheduled to post fourth-quarter earnings within the next week, the Street expects it to report a $0.17 loss per share on revenue of $17.32 million. Everyone will be looking at robust growth in the top-line for the quarter. In the previously reporter Q3, revenue has soared 86% year-over-year.

Since its IPO last year, Tilray had soared 366% on the legalization of weed in many parts of the world. However, all is not ‘high’ for the medical marijuana company for it has fallen 64% since its 52-week high last September.

This is mostly due to fresh players entering the market. And, that brings us to the competition. Read our earnings preview here.

And here’s where you need to check out another Canadian cannabis producer, Cronos Group (CRON). In November, Cronos saw its revenue jump 186% y-o-y to CAD 3.76 million for the third quarter, with robust sales in dried cannabis and cannabis oils. However, the company also widened its net loss to CAD 0.04 per share vs. last year’s CAD 0.01 a share.

But what we really need to see is the massive jump in sales volume. The company sold 514 kilograms in the previously reported quarter, up 213% compared to 164 kilograms sold in the prior-year period. The thing with Cronos is the focus on cannabis oils — they benefit the bottom line by higher margins vs. dried cannabis. In its Q3, cannabis oils alone brought in CAD 1.07 million in sales.

Then in December of 2018, Phillip Morris-parent Altria Group (MO) announced its decision to invest CAD 2.4 billion (about $1.8 billion) in the Toronto-based weed company. The deal is an equity investment on a private placement basis in exchange for common shares in Cronos. In addition to this, Altria will also receive Cronos warrants, that if fully exercised, would be an additional C$1.4 billion in proceeds. At the close of the deal, Altria would hold about 45% ownership interest in Cronos Group shares. Factoring in the exercise of the warrants, the total potential ownership position of Altria would be about 55%.

With new investments, a diversified portfolio and a focus on higher production, Cronos is a very good stock with growth prospects.

Earlier this week, Aurora Cannabis (ACB) posted its second-quarter results of fiscal 2019 with a loss of CAD 238 million. This was a huge drop from the year-ago profit of CAD 7.7 million.

However, the toppling soared 363% to CAD 54.2 million in the period. Shortly after the Aurora earnings, the entire weed stock sector slipped.

Check out our earnings coverage on Aurora.

Dual listed Canopy Growth (TSX: WEED) is expected to release its financial results for the third quarter of fiscal 2019 after the closing bell on a trading Valentine’s Day.

The Ontario based cannabis company has recovered from the sector battering after Aurora results earlier this week. However, the general consensus is that Canopy will post a CAD 0.18 per share loss on revenue of CAD 84.98 million. 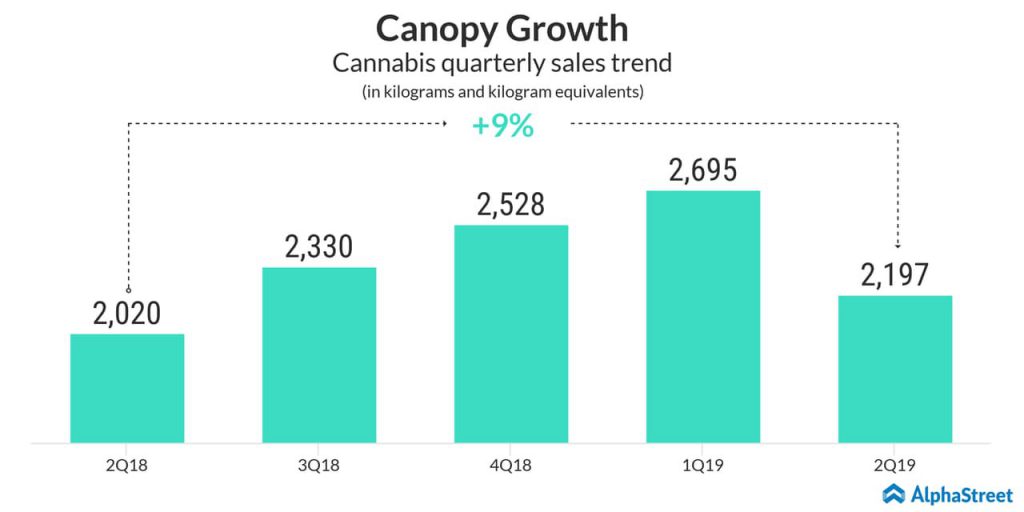 Canopy Growth has been on an active lookout for power moves to increase its US footprint, especially through the recent acquisition of Storz & Bickel, on the general assumption for a higher rate of the legalization of weed in the US. Here’s our earnings preview of Canopy Growth.

With young investors directing their attention to the sector and exploring more investment opportunities, and even Pharma giants weighing in on their valuations of these companies, 2019 may see a few more deals and money coming into the sector.

After Uruguay and Canada, more countries are expected to legalize weed sales for recreational purpose. When it was Canada’s turn, Cronos CEO Mike Gorenstein stated that it was a “watershed moment for our industry and our company.”

But this also means that the expectations are now sky high. While Tilray seems to have slowed its momentum, it would be a good idea to keep tabs on Cronos and Canopy Growth. For now, let’s hope this industry reaches a mature and stable point with regards to regulation and governance.

DISCLAIMER: AlphaStreet does not necessarily endorse or support the author’s views in this article. The author does not have any investments or vested interests regarding the weed sector or any US stocks.