Launching a competitor to the ever-so-popular Instagram could be called suicidal. Even more shocking is when the app actually makes it to the top spot on Apple’s App Store!

Looks like Vero is here to make some major changes to the market dynamics.

In the last few days, Vero’s hype escalated to unprecedented levels, overtaking the likes of Facebook, Twitter, Snapchat and Instagram, So what makes this app that is still in its infancy the talk of the town? 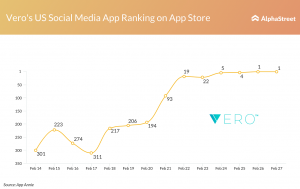 The photo-sharing app, which currently boasts of close to a million registered users, corrected the exact mistake that pissed off the users of its competitors. Launched in 2015, Vero is ad-free and lists outs posts in a chronological order.

The app, which is available for free, benefited the most from all those frustrated Instagram users, who boycotted the app in large numbers when it changed its algorithm to display posts based on its popularity.

Ayman Hariri, the creative mind behind Vero, had problems with the privacy policies of other ad-based social media networks, and so rectified this through Vero.

Launched in 2015, Vero is ad-free and lists outs posts in a chronological order.

Referred to as the new Instagram, Vero however has certain unique features. On this platform, apart from photos, users can share texts and URLs and also offer recommendations for books, movies and TV shows. The app is said to be more useful for bloggers than the regular users.

Rumors suggest that only a limited number of new joinees will get the app for free. The late birds will need to pay a small annual fee.

It’s hard to say whether Vero will pose a threat to Facebook or Instagram. There is a general  trend where new social media platforms fizzle out after going viral. If Vero manages to be an exception, it would be interesting to see how Facebook responds. The usual tactic of offering a buyout would not make much sense, since it already has Instagram under its umbrella.