Chinese solar giant JinkoSolar (JKS) is expected to post its quarterly results before opening bell on Monday, Nov. 26. The market expects earnings of $0.61 a share on revenue of $989 million for the three-month period.

Earlier this year, solar companies from China faced tariffs imposed by the Trump administration. However, it seems that the dust is settling, even as eyes would be on the changing landscape between China and the US during the quarterly earnings call.

Back in August, JinkoSolar had slipped as much as 27% in trade on the day it posted second-quarter results. Investors were not happy with the numbers they say, even as shipments jumped 38.7% to 2,794 MW and revenue soared 32.7% to $915.9 million.

However, earlier this month, JinkoSolar shares jumped 16.5% after reports of a reversal in policy back in China that would benefit solar firms. Earlier, the Chines govt had suggested that further production of panels might go down as it achieved targets. However, recent findings suggest that the targets may be ramped up to more than twice the initiation projection. Shares moved on the hope that the Chinese government may raise the solar capacity goal of 2020 to 210-270 gigawatts. 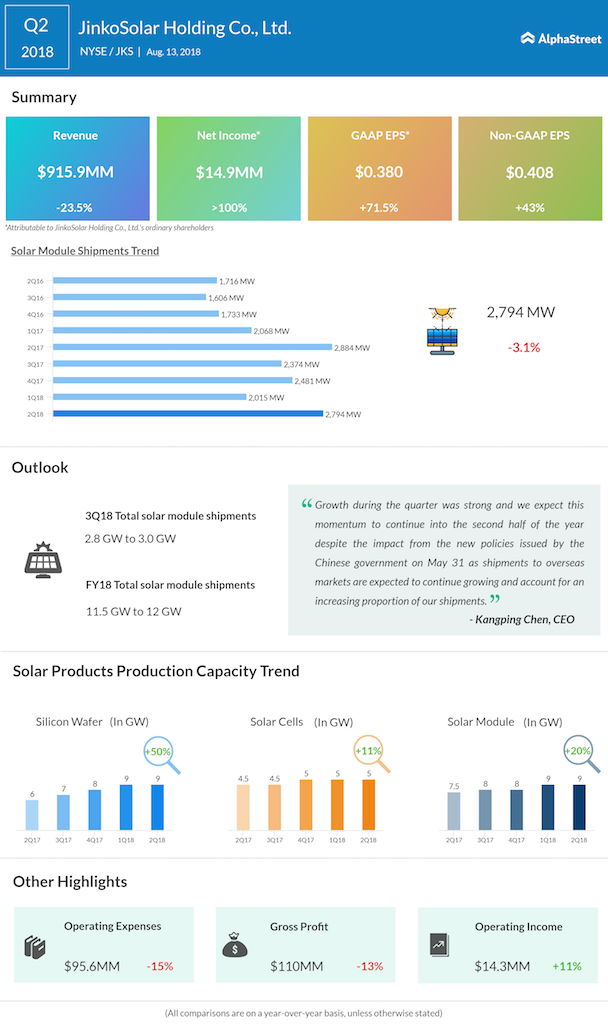 When we take the ownership of the company into consideration, JinkoSolar already has institutions on the share registry — they own 21% share. With analysts of these institutions liking the stock, they are hoping for the solar company to do good. While risks of a ‘crowded trade’ are high in such a stock, it would be good to keep in mind the metrics of Jinkosolar when it reports results next week.