Healthcare giant Johnson & Johnson (JNJ) will kick off pharma earnings for the fourth-quarter as it posts its quarterly and full year 2018 results on Jan 22 before market trading hours.

J&J’s core products — Imbruvica, Darzalex Stelara, Zytiga, Simponi/Simponi Aria and Invega Sustenna — are expected to continue their robust sales, contributing to growth. Even though Xarelto performance declined in the third quarter, the drug is expected to buckle up in the fourth quarter.

However, the stock has fallen more than 12.5% in the past year vs. just a 0.9% slump in the industry. The biosimilar competition for arthritis drug Remicade is hurting the sales outside the US.

In the final quarter of 2018, the Pharmaceuticals segment is expected to grow at a slower pace. In the latter part of the year, biosimilar and generic competition might put pressure on the segment’s growth.

On an average, Johnson & Johnson is expected to earn $0.37 per share on revenue of $5.89 billion for the quarter.

In the previously reported quarter, Johnson & Johnson beat earnings estimate with a 0.99% surprise. This added to upbeat results in the last four quarters. 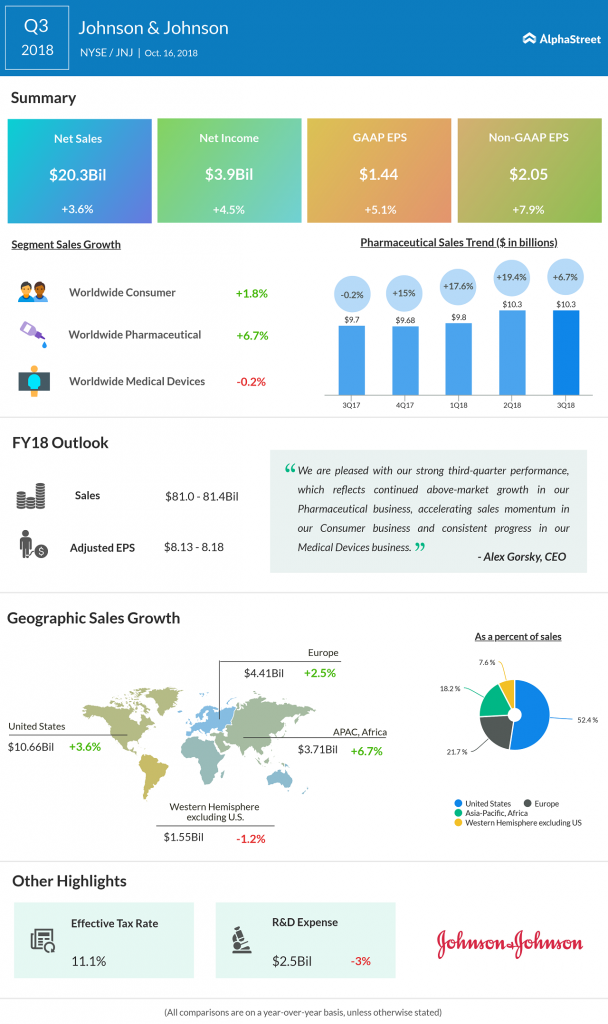 The medical devices company reported higher revenue and income in Q3, driven by strong sales of pharmaceuticals products. Earnings were $2.05 per share during the quarter beating estimates. On a reported basis, earnings was to $3.93 billion or $1.44 per share.

In the first week of January, shares of the company slipped 1% shortly after it reported a 3% sales dip in India in the year ending March 2018. In a regulatory filing with the Corporate Affairs Ministry of India, total sales reportedly fell 7% to about $829 million during this period, hurt by weakness in the medical devices segment after the Asian country imposed strict measures to cap the pricing in the segment.

The negative publicity surrounding Johnson and Johnson baby talc products also pulled the sales of the consumer segment down in India.

The tainted talc has been snowballing into a massive threat for Johnson and Johnson for some time now — since 2016 to be exact.

As the pharma giant heads into 2019, investors started showing signs of paranoia — especially after the $4.69 billion compensation slapped on the company in July.

Then in December of 2018, a Reuters report alleged that Johnson & Johnson knew about the presence of cancer-causing asbestos in its talc products since 1971. The news agency cited unsealed court documents to back its findings. Shares slipped 11% then, wiping $45 billion from the company’s market value.

As the new year starts with the fourth quarter results, eyes would be on how the consumer segment has tackled the talc issue. If Johnson and Johnson has nothing to offer to shareholders in terms of confidence, we are in for a potential sell-off of Tuesday after the results announcement.