According to a recent study, global plastic consumption is estimated to be about 710 million metric tons within the next two decades at the current rate of growth. In 2020, plastic disposal rate has accelerated due to the increased consumption of face masks, PPE and hand sanitizers, in a major setback to anti-plastic campaigns.

“Mechanical recycling means you don’t change the composition of the plastic. But this has many limitations in terms of what feedstock you can use, and the quality of the products. And we are selling a product that is chemically recycled, which means it is a 100% recycled material and can substitute the virgin plastics.”

Even before starting its commercial production, the Terrebonne, Canada-based firm has inked packaging deals with major consumer packaged goods companies including PepsiCo (NASDAQ: PEP), Coca Cola (NYSE: KO), L’Oréal, Danone and L’Occitane en Provence. Notably, some of these companies have already announced their commitment to sustainability and the duration of the deals range between three to five years, giving enough leverage to Loop’s growth ambitions.

The sustainability targets set by some governments to achieve certain levels of plastic recycling bodes well for Loop Industries in the long term.

As of October 8, 2020, the company had no revenues and a net loss of $5.1 million, as the commercial operations are yet to begin. The CFO said the management’s original expectation of generating first revenues in third quarter of calendar 2021 was delayed by Covid-19 and the closure of the US border.

Once fully commercialized, the management estimates EBITA margins from the facilities at approximately 40%. 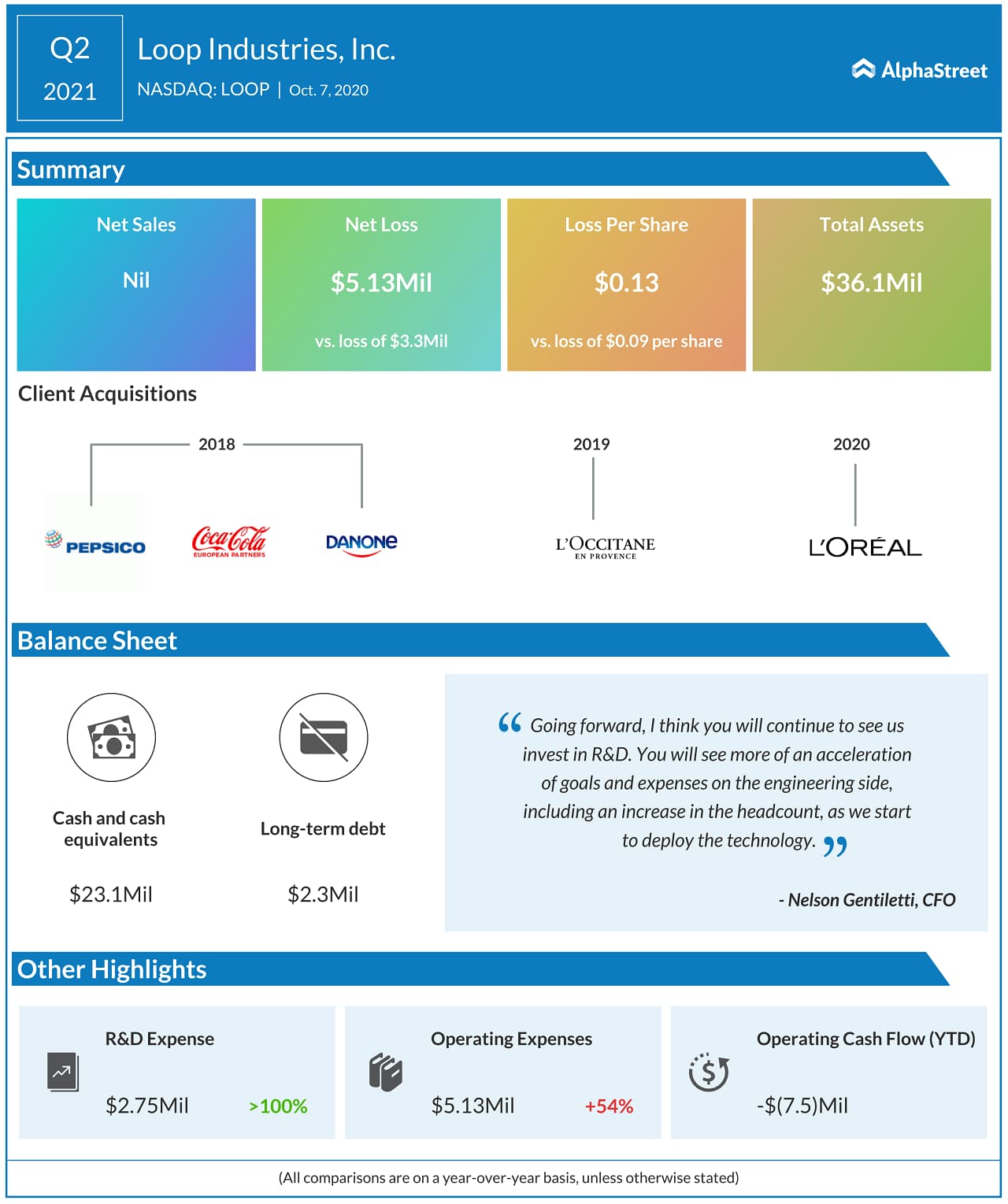 Currently, only the firm’s pilot plant in Quebec is operational, where all the testing and R&D takes place. Gentiletti pointed out that the company is currently in the process of expanding to other regions, by integrating the technology into global PET manufacturer Indorama Ventures’ existing facility in Spartanburg, South Carolina, besides forming an alliance with Europe-based Suez Groupe. The facility in Europe is projected to be operational by 2023.

“There is no question that in Europe we are looking at other opportunities also, because there’s significant demand and governments are adopting taxation on not meeting minimum recycling requirements. Asia is also a very attractive market because of the significant density of population, meaning very big clusters of waste available. It’s also interesting because, for our clients, these are some of the fastest-growing markets.”

In the long run, Loop Industries expects licensing of its technology as a key growth driver. However, Gentiletti believes for the licensing model to work, the company will initially need to invest capital into its technology and show potential clients how successfully it can be implemented.

Going forward, Loop management sees its business model as a mix of licensing and putting up its own facilities in new and promising markets.

“We believe that putting up the first two facilities is a significant driver of value for future licenses that we might sell. Because once the product is coming out, and we are selling it, and the economics are reconfirmed with the people, I think the value of the license will grow exponentially.”

LOOP shares have gained 22% in valuation since the beginning of this year.