The market's response to the cryptocurrency trading service, which was launched in October last year, has been encouraging

PayPal ended fiscal 2020 on an upbeat note, with overall financial performance getting a boost from the e-commerce boom and the introduction of cryptocurrency trading service a few months ago. The company’s value more than tripled since the onset of the crisis in early 2020, when the stock was hit by a major sell-off. Given the positive outlook for the digital payment market, PYPL remains a good investment option despite the recent rally that made it look overvalued. With experts predicting a further increase in price this year, many prospective buyers would find the stock unaffordable.

After upbeat start to FY21, Intuit looks to emerge stronger

The California-based digital payment company is riding on the mass shift to online shopping platforms, with customers staying away from brick-and-mortar stores after the shelter-in-home orders came into effect. While it was out of compulsion that people took to digital marketplaces initially, the majority of them are likely to stick to their new shopping habit, for the convenience and experience that offers. That is an opportunity PayPal looks to tap into in the coming months and in the post-COVID era.

Having spent heavily on ramping up their digital capabilities during the crisis period, merchants and retailers would promote online transactions to ensure optimum returns on their investments. That justifies PayPal’s bullish outlook on customer additions for the current fiscal year –expects to add 50 million net new active accounts. Interestingly, the digital transformation spree is not limited to a few industries but is widespread across all areas of the economy.

“Today’s digital reality is rapidly accelerating the need for a digital wallet that encompasses payments, financial services, and shopping. This year, our digital wallet will change more than it has ever changed before, significantly increasing its functionality within a single integrated and beautifully designed app, it should meaningfully increase consumer engagement. In 2020, we made significant progress in expanding the functionality of our PayPal and Venmo wallets. We added the ability to buy, sell and hold cryptocurrencies.” 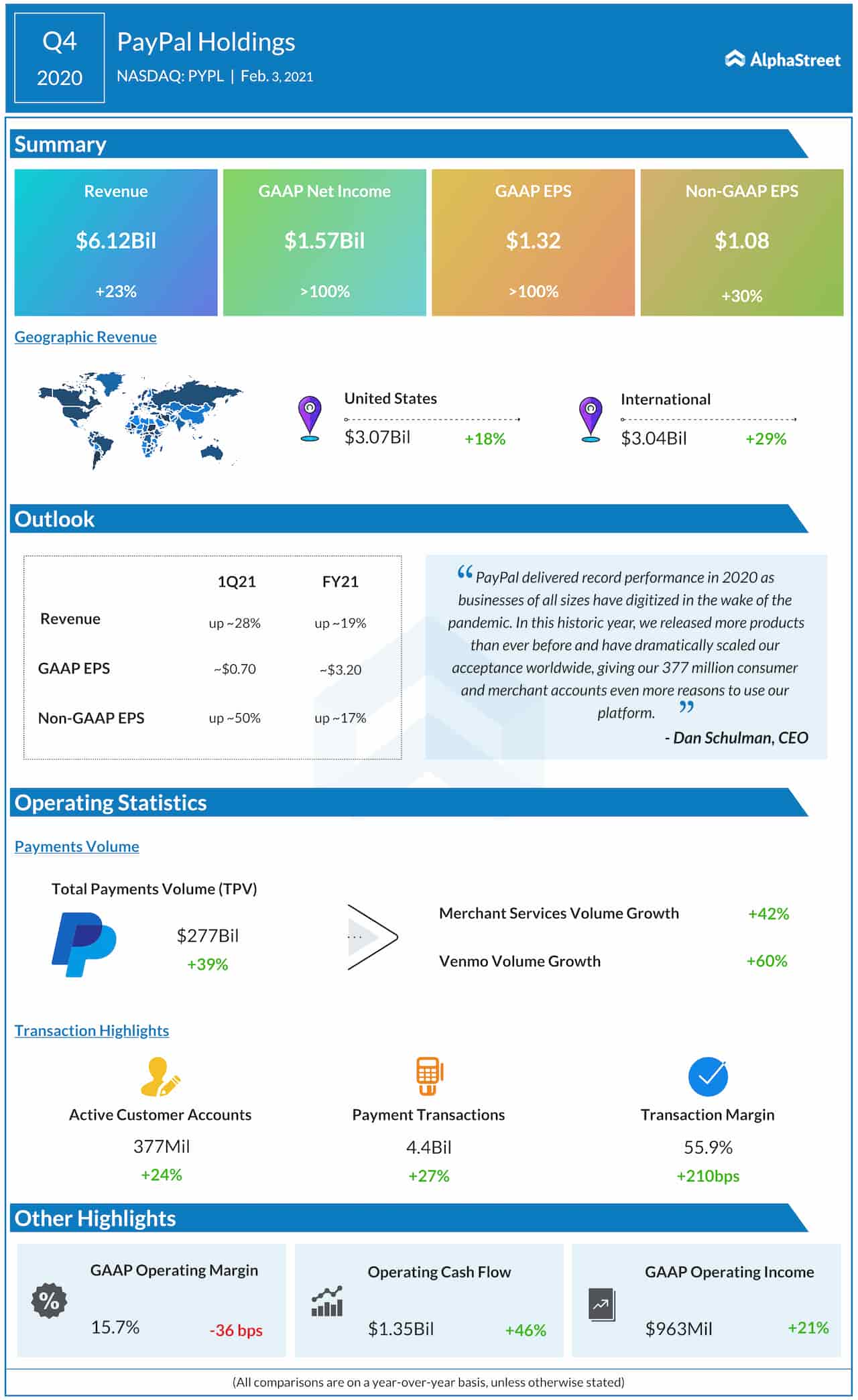 PayPal’s adjusted earnings climbed 30% year-over-year to $1.08 billion in the fourth quarter, aided by record growth in payment volume. Total revenues advanced 23% to $6.13 billion, which also came in above analysts’ forecast. While the company partnered with several new merchants including big names like Macy’s (M) and Footlocker (FL), it added new accounts at a slower pace than in the early part of last year, raising concerns about the sustainability of the ongoing uptrend.

The volume of cryptocurrency traded on the PayPal platform since the facility was launched in October last year exceeded expectations. Encouraged by the positive response, the management is planning to expand the service to markets outside the U.S. It needs to be seen to what extent would the crypto service help the company’s bottom-line going forward, considering the digital currency’s not-so-impressive performance on other platforms.

PayPal’s stock climbed to a record high on Thursday, reflecting the bullish sentiment that followed its upbeat fourth-quarter results. The stock traded slightly above $266 in the early trading hours, after gaining 15% since the beginning of the year.

Yum! Brands (YUM) has what it takes to satisfy investor appetite

Yum! Brands, Inc. (NYSE: YUM) owns some of the most popular food brands and serves customers in almost every part of the world. Over the years, the company's leading segments

Starbucks (SBUX): Here are a few points to keep in mind if you have an eye on this coffee giant

Shares of Starbucks Corporation (NASDAQ: SBUX) were down over 1% on Friday. The stock has dropped 27% year-to-date but has gained 11% over the past three months. Earlier this week