Roku (ROKU) Stock: Why is it a good idea to buy the recent dip

Roku's Platform revenues climbed to a record high in the second quarter, aided by continued user growth, but the number of streaming hours dropped sequentially

After defying analysts’ forecast for negative earnings and recording profit in recent quarters, media streaming platform Roku, Inc. (NASDAQ: ROKU) extended the turnaround with strong June-quarter earnings that beat estimates by a wide margin. Even though the main operating metrics indicated continued growth, investor sentiment was hit by weakening hardware margins and an unexpected decline in viewership, represented by the number of streaming hours.

The stock, which reached a new peak last month, suffered one of the worst intra-day losses soon after the earnings announcement this week. But the pullback has opened a buying opportunity that most investors wouldn’t want to miss. Market watchers, in general, are of the view that the slowdown is the prelude to sustained long-term growth. They strongly recommend buying ROKU, citing the impressive target price that represents a 21% growth.

The steady uptick in Roku’s market share in the highly competitive market is a testament to the sustainability of its unique business model. Also, monetization is improving steadily, supported by the increase in advertising revenue.

In what is probably one of its best shows ever, Roku this week reported an 81% growth in second-quarter revenues to $645.1million, mainly reflecting record revenue growth at the core platform segment. As a result, the company swung to a profit of $0.52 per share from last year’s loss of $0.35 per share. The numbers also beat the estimates. 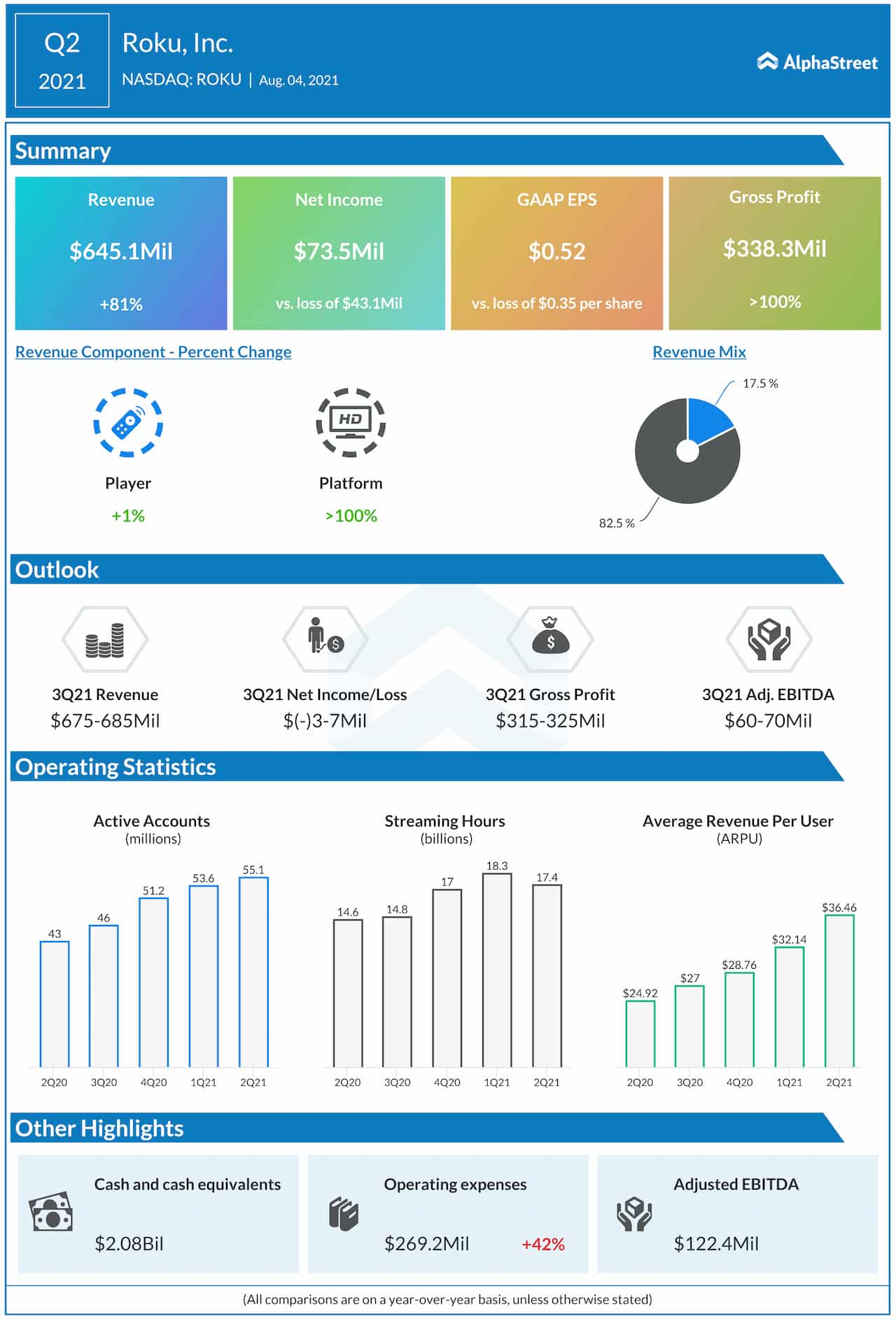 Meanwhile, there was a sequential dip in the number of streaming hours, mainly owing to the relaxation of COVID restrictions across markets, which encouraged people to spend more time on outdoor leisure activities. The good news is that viewership is still much higher compared to the year-ago period.

While the company benefited from the COVID-driven spike in consumption, higher expenses related to tight component supply and logistics issues weighed on margins, as the additional cost pressure was not passed on to customers. The resultant drag on the bottom line is expected to continue into the next year and platform revenue growth is seen decelerating as against last year’s pandemic-driven boom. But those challenges are temporary and the company looks well-positioned to beat them in the long term, thanks to the uptick in advertising income and investments in original content.

Looking ahead to the rest of the year, let me offer three key observations. First, we will face tough year-over-year comps across our business in the second half of 2021 due to pandemic-related outperformance in the second half of 2020. Second, we will also face tough comps within the year-over-year growth rate of our active accounts and streaming hours, given last year’s demand spike. And third, the secular trend toward streaming remains intact, and we will benefit from our strong position as the shift to TV streaming continues.

Will Netflix maintain its dominance in streaming space post-COVID?

Extending the downtrend that followed the earnings release, Roku’s shares traded lower during Friday’s session. In the past twelve months, their value more than doubled. It is estimated that the stock would breach the $400-mark once again in the near future.