The coffee giant Starbucks (SBUX) plans to announce its first quarter results of fiscal 2019 after markets close on Thursday, January 24. Analysts expect about $0.65 per share in earnings on revenue of about $6.49 billion in the three-month period.

NEW KIDS ON THE BLOCK A THREAT TO THE GIANT

Starbucks seems to be losing the title of the undisputed leader in the caffeinated beverage market in recent years due to the ever-growing competition — both back home and abroad. While the company has renewed its focus on the Chinese market hoping to tap into unexplored areas, global sales growth continues to weaken.

The coffee giant’s China initiatives are facing setbacks too, with several new players in the local market — one among them being Luckin Coffee. There is an indication that too much dependence on China for future growth could prove disastrous for Starbucks.

Even as all this builds up, the Starbucks stock made substantial gains in the latter part of last year despite a downtrend in the first half — it hovered near the all-time highs since the last few years.

Over the past three years, SBUX witnessed a lot of volatility and often underperformed the S&P 500 index.

WILL THE NEW STRATEGIES DELIVER?

A month ago, the coffee giant laid out numerous growth strategies for two of its key markets — US and China — at its Investor Conference.

In order to fuel customer traffic in both US and China markets, Starbucks announced it simplified its business operations and adopting new strategies. This came a month after the company said in November that it was planning to cut around 5% of its global workforce as part of its business reorganization efforts.

With delivery services on the rise, Starbucks plans to provide coffee delivery service across the US through its partnership with UberEats. How this translates to the top line is yet to be seen. The company has been testing its delivery service in Miami for the past two months and now plans to expand it to around 2,000 of its stores by early 2019.

LOOKING BACK AT THE PREVIOUS QUARTER 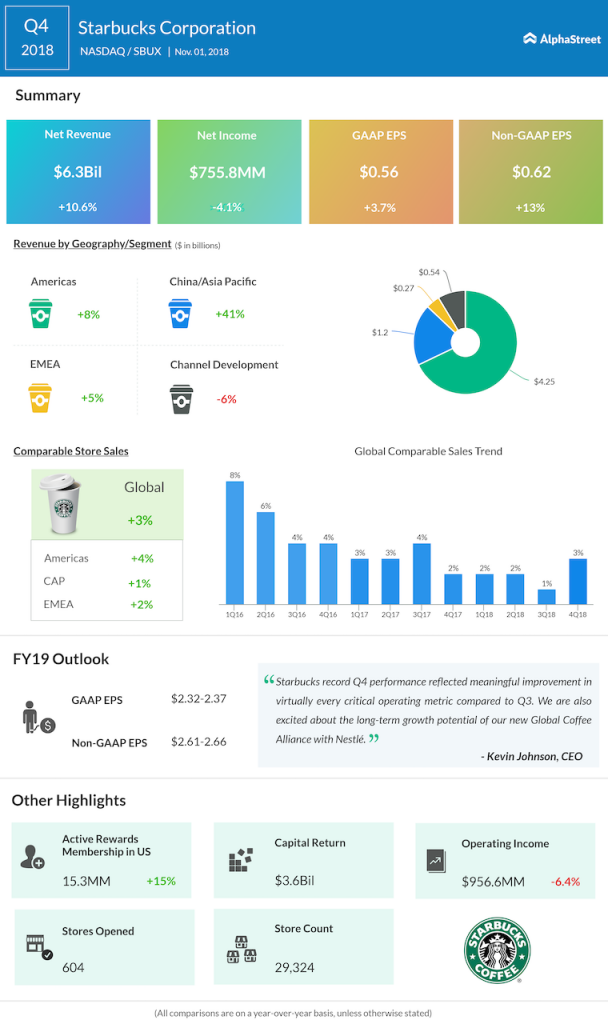 In the previously reported fourth quarter of 2018, Starbucks cut its trend of weak sales in the last few time by posting an 11% jump in consolidated net revenues.

This also translated to global comparable store sales inching 3% higher. As soon as the results were out, the stock as up at least 8% then.

Starbucks had added 604 net new stores in the past quarter, one more than a year ago.