The TJX Companies Inc. (NYSE: TJX) topped revenue and earnings expectations for the third quarter of 2020, allowing the stock to gain 1.2% in premarket hours on Tuesday. 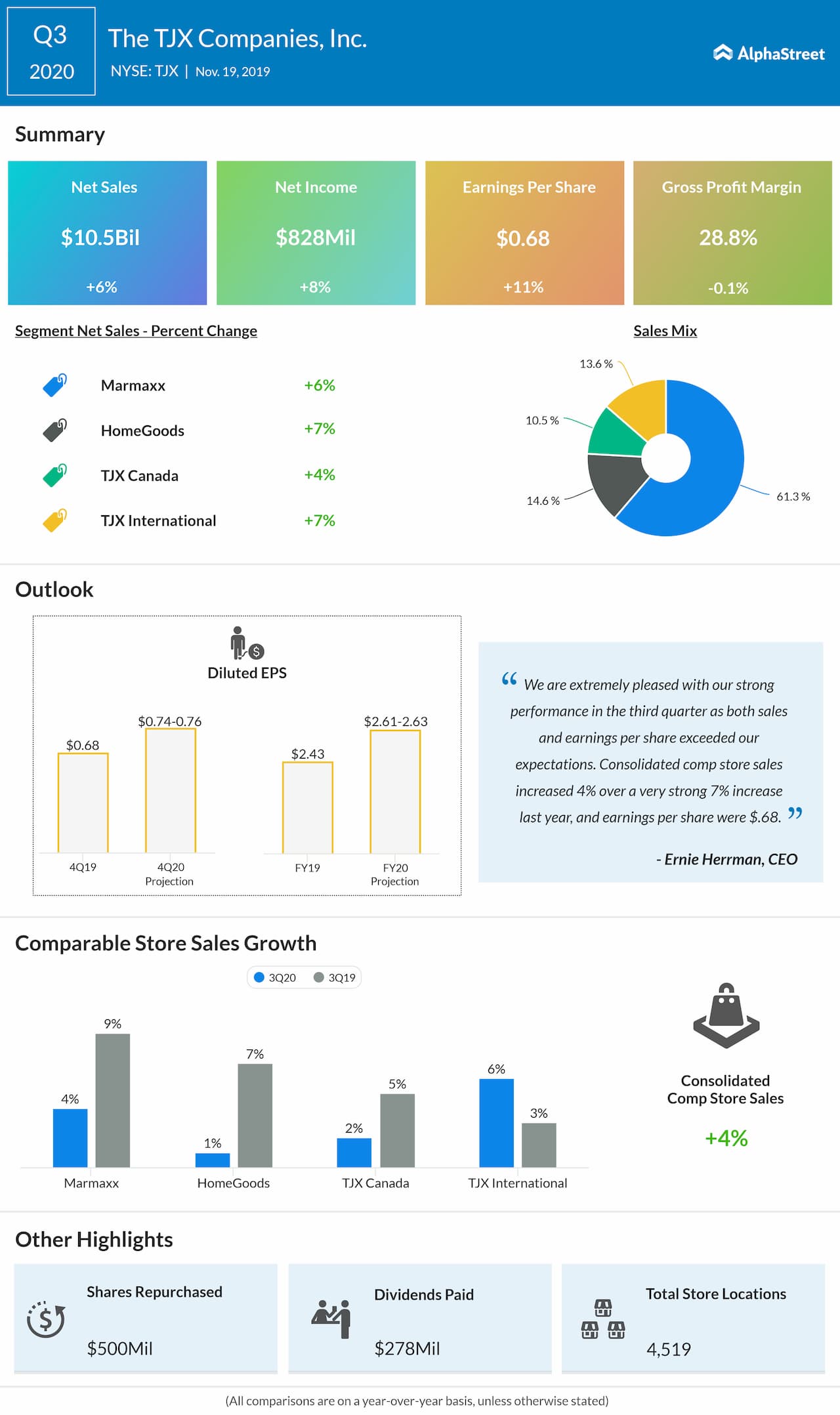 CEO Ernie Herrman said, “We are especially pleased that Marmaxx, HomeGoods, and TJX Canada each delivered a sequential increase in their comp store sales growth, and TJX International maintained its strong momentum driven by excellent performance in Europe. Further, customer traffic was the primary driver of the comp store sales increases at each of these four major divisions. Looking ahead, the fourth quarter is off to a solid start and we have many initiatives underway to keep driving traffic and sales to our stores and online during the holiday season and beyond.”

During the quarter, TJX posted net sales increases across all its divisions. All four divisions also saw single-digit growth in comparable store sales.

Total inventories at quarter-end were $6.3 billion. Consolidated inventories on a per-store basis, including the distribution centers, but excluding inventory in transit, the company’s e-commerce sites, and Sierra stores, were up 9% on a reported and constant currency basis.

During the third quarter, the company increased its store count by 107 stores to a total of 4,519 stores. Square footage increased by 4% over the same period last year.

For the fourth quarter of 2020, TJX expects diluted EPS to be $0.74 to $0.76. Comparable store sales are estimated to grow 2-3% on a consolidated basis and at Marmaxx.

For fiscal 2020, TJX raised its earnings guidance and now expects EPS of $2.61 to $2.63, representing a 7-8% increase over last year. This compares to the previous outlook for EPS of $2.56-2.61, representing a growth of 5-7% from last year. The company anticipates comparable store sales growth of 3% on a consolidated basis and 3% to 4% at Marmaxx.

On November 18, TJX invested $225 million for a 25% minority stake in the privately-held, Russian off-price apparel and home fashions retailer Familia. Familia operates more than 275 stores throughout Russia. The transaction gives TJX an opportunity to leverage the significant growth potential in the Russian market. The company’s ownership in Familia is expected to be slightly accretive to EPS beginning in fiscal 2021.