Wells Fargo (WFC) today announced that it’s selling its retirement division to Principal Financial Group (PFG) for $1.2 billion. The deal seems to be part of the ongoing transformation efforts happening at the bank to improve efficiency and focus on high-growth areas.

The retirement division had $827 billion in assets under management and both the firms expect the deal to be closed in the third quarter of 2019. However, the street seems to be not impressed by the announcement with the stock price decreasing 1.4% in the afternoon session today.

At the end of last month, Wells Fargo announced that its CEO Tim Sloan is leaving the firm. Sloan is bidding adieu to the top job after a two-year stint. The abrupt exit is primarily attributed to the fact that Sloan has been receiving criticism from all fronts for failing to transform the bank and improve its reputation as it has been hit by series of scandals over the past two years.

The board has appointed Allen Parker as interim CEO until a replacement is found. As the board looks for ideal candidates for the top job, Parker would be meeting the analysts on Friday’s earnings conference call. Wells Fargo is slated to report its Q1 2019 results on April 12 before the bell.

Parker has a tough job on hand to ensure Wells Fargo is cleaning up its act and improve its credibility amongst all stakeholders. Investors would be expecting more strategic updates from Parker on how he plans to take the scandal-hit bank forward until a permanent replacement is identified.

What does the street expect?

For the first quarter, analysts are expecting earnings to improve 14.5% to $1.1 per share. Sales is expected to decline by 4.3% to $20.99 billion. As the banking industry is currently facing a lot of headwinds, it would be interesting to see whether the bank is able to surpass estimates on Friday.

With slowing US and global economy, Brexit, uncertainty over Fed rate hikes, and trade wars, Wells Fargo and the performance of its rivals might be impacted due to unfavorable macros. If the Fed decides to lower its rates, there could be pressure on interest rates which would impact the yield curves. As a result, profits for banks might be under pressure.

In the fourth quarter, earnings saw a 1% dip due to lower trading revenues, mortgage banking fees, and trust and investment fees. It also got hurt by an increase in tax expenses. However, earnings beat analyst expectations while sales failed to exceed estimates. Revenue decreased 5% to $21 billion and net interest income increased $331 million to $12.6 billion. Non-interest income was $8.3 billion, down $1.4 billion from last year. 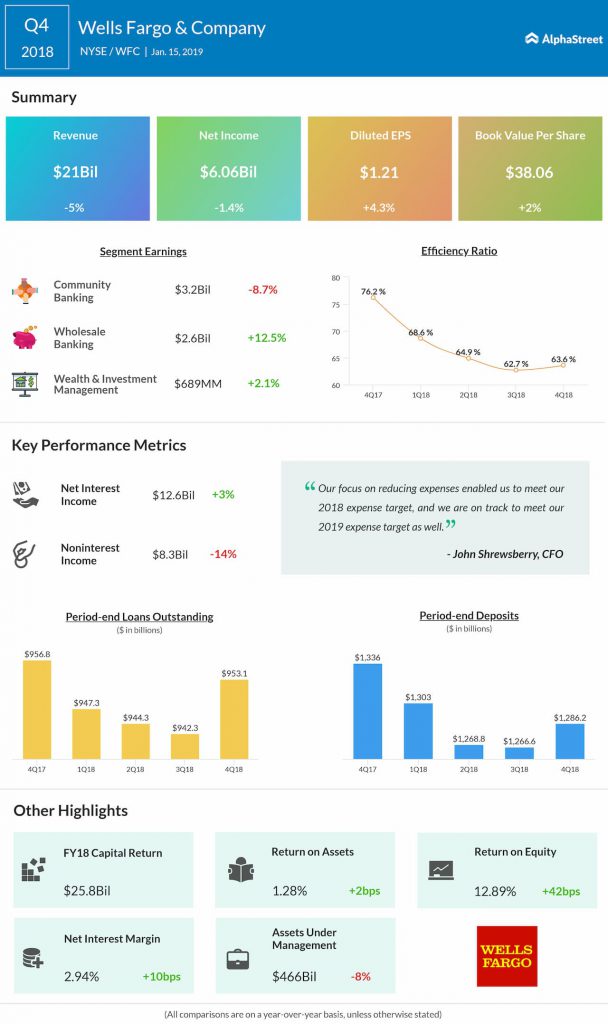 Apart from Wells Fargo, JPMorgan (JPM) is also scheduled to report its earnings on Friday before the bell. The banking giants are going to kick start the earnings season for the second quarter.