A cloud from China aims to fly over the Amazon

While people were busy showering praises on the cloud computing platforms of Amazon (AMZN), Microsoft (MSFT), Google (GOOGL) and IBM (IBM), a Chinese company, without much fanfare, ticked up 1% in the global cloud service market share — Alibaba (BABA).

According to a recent report by Synergy Research Group, Alibaba is currently the fifth largest cloud infrastructure provider, behind the above-stated giants. The report states, “A notable change in Q4 was that a doubling of cloud revenues at Alibaba enabled it to join the ranks of the top five operators for the first time.”

Launched in 2009, Alibaba’s cloud computing platform — Aliyun — saw triple-digit revenue growth in three of the past five quarters, narrowly missing the mark in the other two. Though Aliyun is currently only one-tenth the size of Amazon Web Services (AWS) in terms of revenue, the Chinese e-commerce giant aims to surpass the American counterpart as early as 2019. 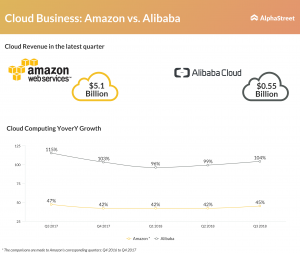 As you may have guessed by now, Aliyun is the largest cloud infrastructure service in China, and its global expansion process is as fast-paced as its growth. At the Mobile World Congress held in Barcelona last month, Alibaba launched eight of its cloud products for European firms. These products, featuring artificial intelligence and big data, were earlier available only in their home country. Besides Europe, the company is also tightening its grip on Asia: only last week, Alibaba built its first data center for cloud services in Indonesia.

The US, of course, is a golden goose, especially for tech firms due to higher disposable incomes. Alibaba follows a two-way approach to expand its services in the country where its rivals are much bigger. One, focusing on Chinese companies operating in the US, including drone-maker DJI; and two, trying to convert American firms that are already operating in China into its own platform.

At the Mobile World Congress held in Barcelona last month, Alibaba launched eight of its cloud products for European firms.

On the other hand, American cloud companies face a tough time establishing a footprint in China due to cumbersome bureaucratic regulations that require them to partner with Chinese firms. Outside China, both the American and Chinese rivals are set to cross paths in various regions including Europe and India. These will turn out to be the free and fair battlegrounds for the companies.

In retrospect, Alibaba’s cloud service is making seeing pretty good growth, and there are no signs of slowing down. While overtaking AWS is an ambitious dream altogether, it is not impossible.