Advanced Micro Devices (AMD) reported Q4 EPS of $0.08, which was in line with analysts estimates. Revenue of $1.42 billion, missed modestly Street’s views. Analysts had estimated AMD to earn $0.08 per share on revenue of $1.45 billion. AMD stock jumps about 9% during the after-market hours.

Revenue growth of 6% in the recently ended quarter was aided by the strong performance of the Computing and Graphics segment. On a GAAP basis, AMD reported a profit of 4 cents per share compared to a loss of 2 cents per share in the prior-year quarter.

Revenue from Computing and Graphics grew 9% year-over-year, driven by the strong sales of Ryzen processors. Enterprise, Embedded and Semi-Custom segment revenue was flat compared to the year-ago quarter. 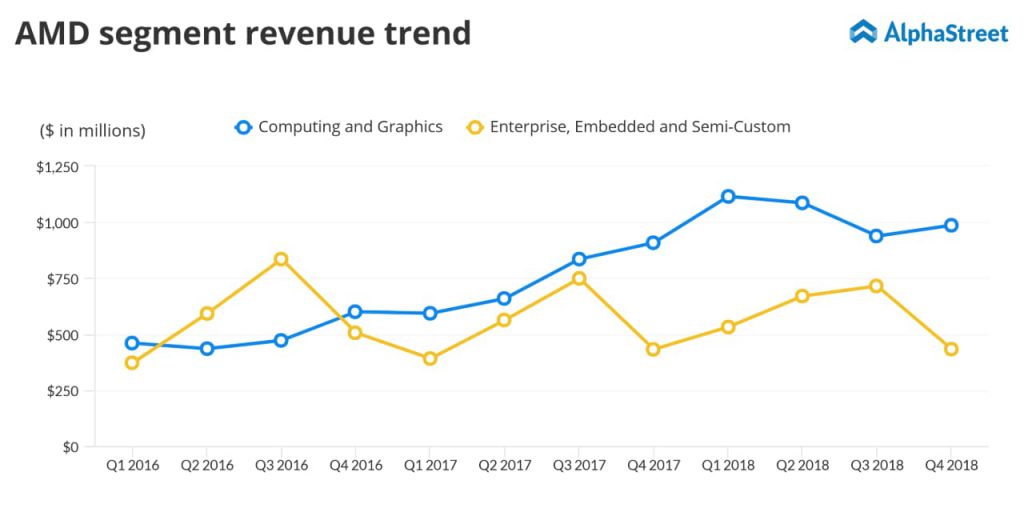 CEO Lisa Su said that the company more than doubled EPYC processor shipments sequentially and delivered record GPU datacenter revenue in the quarter. “Despite near-term graphics headwinds, 2019 is shaping up to be another exciting year driven by the launch of our broadest and most competitive product portfolio ever with our next-generation 7nm Ryzen, Radeon, and EPYC products,” she added.

After Nvidia (NVDA) lowered its Q4 2019 revenue guidance on Monday, almost all the semiconductor companies got battered yesterday and today. AMD stock has slipped about 12% from its Friday closing price of $21.93, while the Philadelphia Semiconductor Index dropped about 3% for the same timeframe.

For the first quarter of 2019, AMD expects revenue to be about $1.25 billion, plus or minus $50 million, a decrease of approximately 12% sequentially, hurt by the continued softness in the graphics channel and seasonality across the business. This outlook also represents a year-over-year decline of 24%, driven by lower graphics sales due to excess channel inventory, the absence of blockchain-related GPU revenue and lower memory sales.