Internet-based digital services have played a key role in easing the impact of COVID-induced movement restrictions. Widespread digital adoption facilitated remote work and helped businesses and individuals stay connected, but services like online travel booking and restaurant reservation were hit hard by the shutdown. Alphabet, Inc. (NASDAQ: GOOG/GOOGL), the company that owns Google, has effectively navigated through the slowdown in business-related search activities and advertising.

After the initial slump, online ad spending recovered as enterprises turned to Google to promote their businesses amid growing optimism about market reopening, especially after the vaccination drive picked up momentum. Alphabet’s market value nearly doubled in the past twelve months and crossed the $1-trillion mark during that period. It is one of the few Wall Street stocks that created shareholder value consistently over the years.

Experts unanimously recommend tapping into the rare buying opportunity that exists now. Currently trading slightly above $2,400, the stock looks fairly priced, though many prospective buyers would find it unaffordable. GOOGL is probably on the way to outperform its FAANG peers in the coming months. Encouraged by the impressive cash flow performance, the management is preparing to repurchase up to an additional $50 billion of the company’s stock.

“For Google Services, for the remainder of 2021, year-over-year comparisons will be affected meaningfully by the impact of COVID last year with a greater benefit in Q2 from an easier comp relative to what you saw in Q1, and then beginning to lap stronger performance in the second half of the year. In the first quarter, we continue to benefit from elevated consumer online activity and broad-based strength in advertiser spend. It is too early to say how durable this consumer behavior will be as economies recover and restrictions on mobility are lifted.” 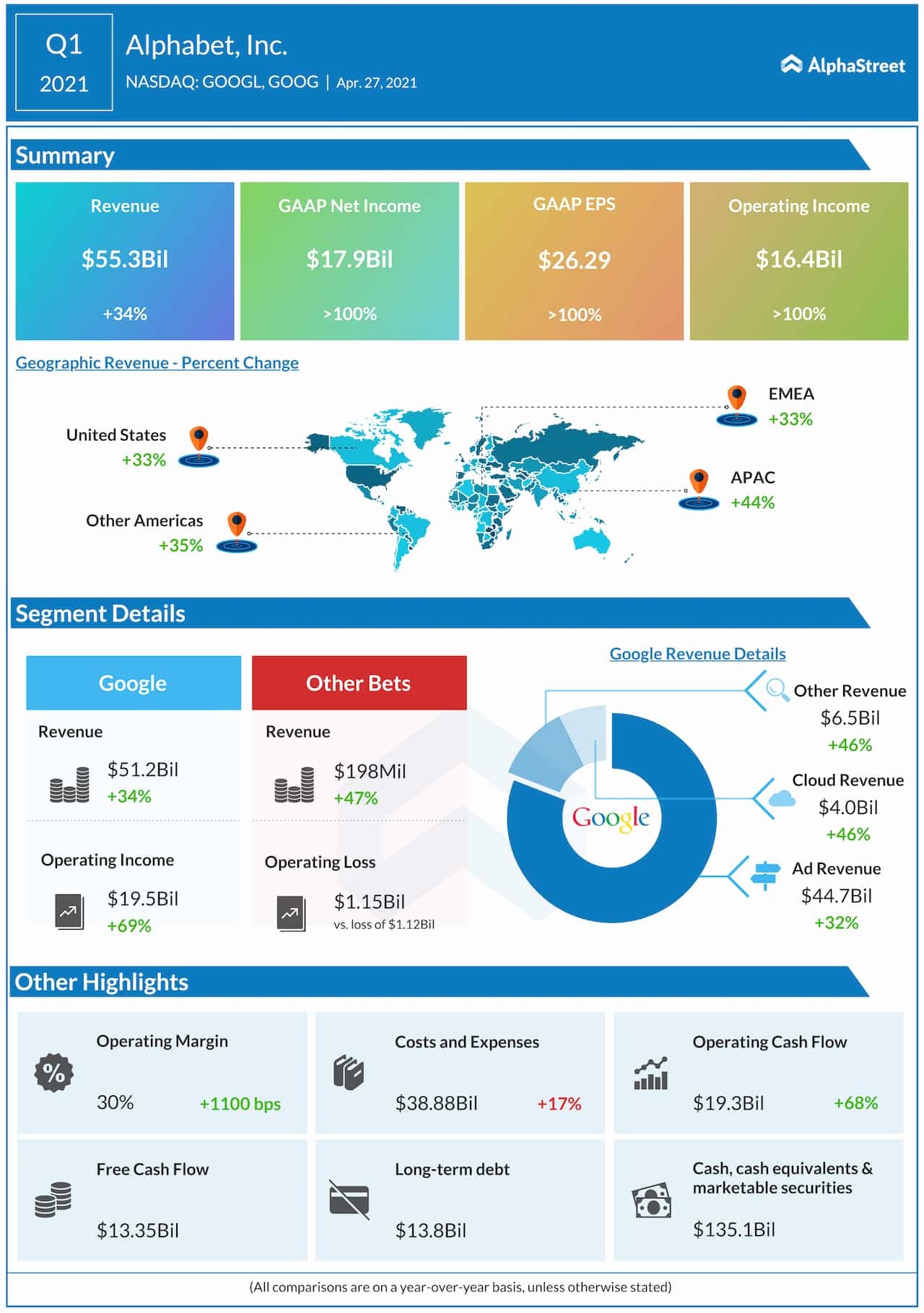 It is estimated that the ongoing market reopening would encourage enterprises to spend more on digital advertising in the coming months, to revive their businesses after the tough times when customers stayed away from brick-and-mortar establishments.

Alphabet’s video streaming arm YouTube witnessed a spike in traffic after the onset of the pandemic as people consumed more content during the lock-down, contributing to the company’s ad revenues. While Google Cloud continues to lag behind market leaders Amazon (NASDAQ: AMZN) Web Services and Microsoft’s (NASDAQ: MSFT) Azure, it is well-positioned to ride the digital transformation wave.

Ad sales, which account for more than 80% of Alphabet’s total revenues, bounced back from last year’s dip and reached near the pre-crisis levels, clocking a 32% annual growth in the March quarter. Google Cloud, the rapidly growing division that thrives on the widespread cloud migration, grew 46%. As a result, the top-line rose to an all-time high of $55.3 billion, far exceeding the consensus forecast. Earnings nearly tripled to $26.29 per share and topped expectations. The market will be closely following the company’s developer event to be held next month when it is expected to provide key product updates.

Outperforming the S&P 500 index, to which it belongs, Alphabet’s shares grew a whopping 40% since the beginning of 2021. The stock traded up 5% soon after the market opened on Wednesday, continuing the upswing triggered by the earnings report.