Over the years, Mastercard Inc.  (NYSE: MA) has established an extensive digital payments infrastructure that helped it dominate the market. The diversified business model has enabled the credit card firm to maintain business momentum despite high inflation putting pressure on consumer spending.  Interestingly, the company’s payment network keeps growing at a time when the broad market is affected by the economic slowdown.

Experts, in general, are optimistic about Mastercard’s potential to create long-term shareholder value, and strongly recommend buying the stock. As per the consensus estimate, MA would grow by a third in the next twelve months, and breach the $400-mark. The rare combination of favorable valuation and solid growth prospects has created a unique buying opportunity that investors wouldn’t want to ignore.

The New York-based payment service provider, which generates revenue by charging fees on banks that offer Mastercard-branded payment products, bounced back after being hit by the pandemic-related disruption initially. It has stayed largely unaffected by macro headwinds like interest rate hikes and high inflation, in what could be a testament to the sustainability of the business and healthy fundamentals.

Moreover, Mastercard looks poised to tap into new opportunities in payment service, such as the buy-now-pay-later facility that allows customers to make purchases and pay at a later date. The high volumes translate into better margin performance that in turn is strengthening profitability. 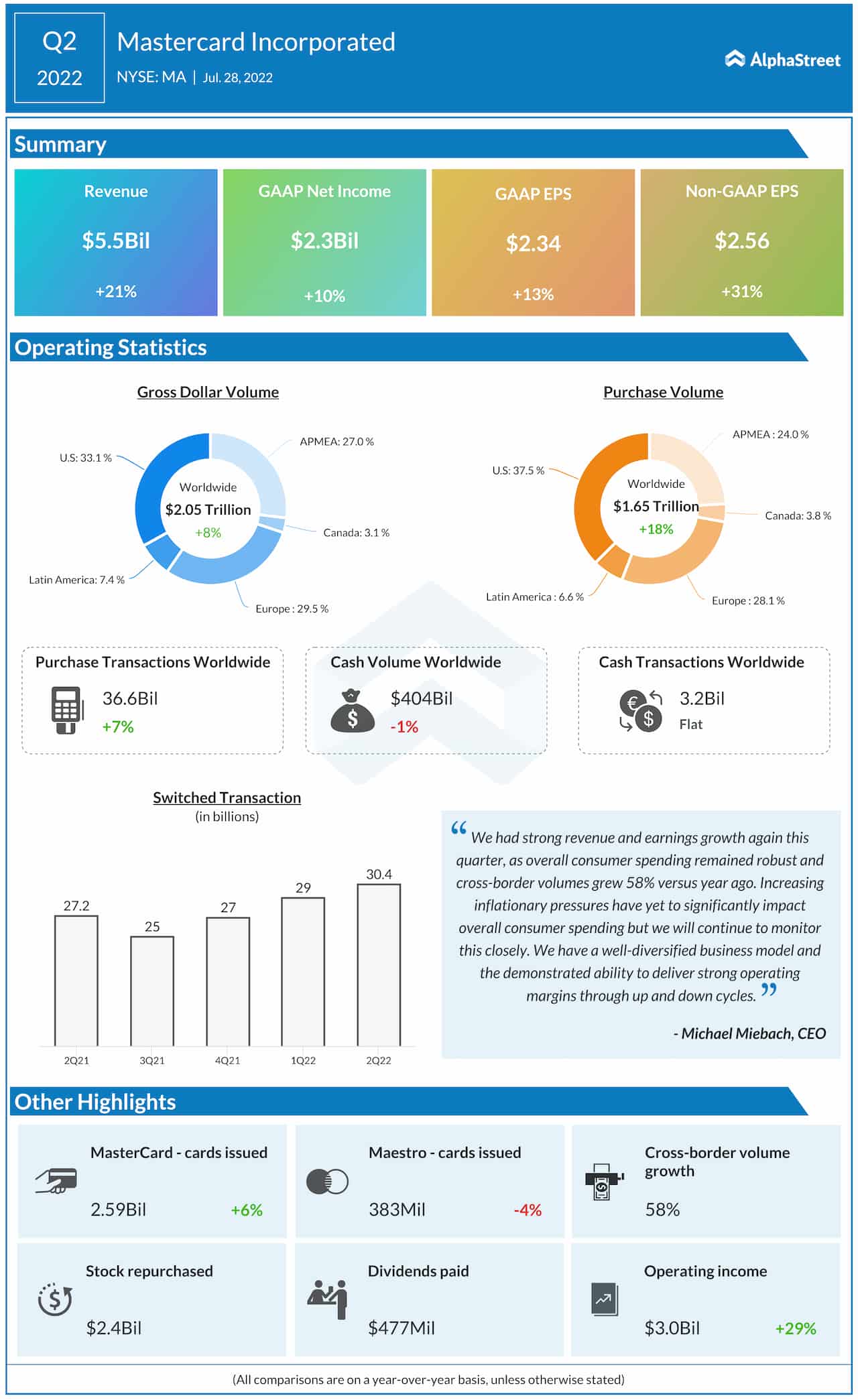 Analysts’ consensus forecast is that the company would earn $2.57 per share in the third quarter, the results for which will be published on October 27 before trading commences. The earnings forecast implies an 8% year-over-year increase. Revenues are seen growing in double-digits to $5.66 billion.

In the second quarter, the bottom-line performance fell short of expectations for the first time in nearly two years, despite revenues beating estimates. Adjusted profit climbed 31% annually $2.56 per share on revenues of $5.5 billion. There was a 58% growth in cross-border volume even as the number of Mastercard cards issued rose 6% to about 2.6 billion.

Referring to the results at the last earnings call, Mastercard’s CEO Michael Miebach said that retail spending had remained healthy in the U.S. even as consumers navigate a high inflation environment. According to him, strong job creation and the buildup of excess savings during the pandemic helped consumer spending. Spending trends are positive in Europe also, but risks related to higher interest rates and natural gas supply remain a concern. Latin America witnesses continued softness in growth, and Asia has generally lagged behind the recovery of other regions.

Mastercard’s stock traded close to the $300-mark this week, which is down 17% from a year earlier and below the 52-week average. MA closed Tuesday’s session higher.