Consumer electronics retailer Best Buy Co. Inc., announced its plan to close all its mobile standalone stores in the U.S. by the end of May. This was shortly before Best Buy registered better than expected revenues in the fourth quarter, helped by robust comparable sales growth led by the gaming segment and favorable market conditions.

However, the decision to close 250 of these stores came to fruition since they contributed just over 1% of the overall revenue. The closures do not include the company’s stores in Canada.

These mobile stores primarily sell cellphones and accessories and are located in malls. Best Buy plans to continue the sale of mobile phones and related products through its existing big box stores and also through its online channel.

These stores were opened before the launch of the first iPhone and at a time when there was good growth in the mobile phone business. Ten years down the line, the scenario has changed and the margins have gone down while the cost of operating these stores is still high.

This step is part of a strategy to optimize operations and improve profitability in an increasingly competitive environment. Customers tend to check out products in stores and then buy them online at lower prices. Best Buy was a victim of this trend which led to a tumble in its sales and profits. The company closed its underperforming stores, cut prices and focused on better customer service which led to better performance.

Best Buy believes that its latest move to shift mobile phones to its big box stores will benefit both the company and customers.

It is unclear as to how many employees will be affected by these closures. However, Best Buy said it will transfer as many employees possible to its existing operations while also providing others with severance along with assistance in finding employment outside the company.

Encouraged by a 25% earnings growth, the company upgraded its guidance for the current fiscal year. The stock gained more than 4.5% in the pre-market trading on Thursday.

Earnings, adjusted for charges related to the tax reform and restructuring costs, climbed to $2.42 per share in the fourth quarter of 2018 from $1.93 per share a year earlier helped by exceptionally strong holiday sales. The bottom line came in above the expectations analysts, who had upped the initial estimate to reflect the underlying strengthening trend. Reported earnings were $1.23 per share.

A 9% growth in same-store sales translated into a 14% year-on-year increase in revenues to $15.4 billion, supported by a broad-based upturn in the performance of business segments. 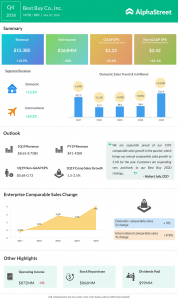 “The comparable sales growth of 9.0% in the quarter is the result of the strong execution of our strategy combined with better product availability, a continued healthy consumer confidence and positive macro conditions, strength in the gaming category, and a favorable competitive environment, as we benefited from the exit or decline of certain competitors,” said CFO Corie Barry.

The fourth quarter was significant for Best Buy, considering its muted operations in the preceding quarter when business was impacted by hurricanes, and restructuring costs dragged the bottom line performance.