The company is all set to publish fourth-quarter results on December 8, after the closing bell

The performance of Broadcom, Inc. (NASDAQ: AVGO) has been impressive in the last few years — a period of high uncertainty — as the successful business model helped it remain insulated from market headwinds. Currently, the San Jose-headquartered semiconductor titan is preparing to acquire cloud computing firm VMware in one of the biggest deals the industry has ever witnessed.

Armed with a diversified portfolio, Broadcom looks well-positioned to leverage the ever-growing demand for innovations in areas like data center wireless and broadband technology. Reflecting the positive investor sentiment, the company’s stock has stayed largely unaffected by the market selloff this year, though it withdrew from last year’s peak. And, the valuation is just right for those looking to own the stock now.

Moreover, Broadcom’s dividend policy is attractive, characterized by distribution of half of its cash flows among shareholders. After regular hikes over the years, the dividend yield currently hovers near 3%. AGVO is a safe investment that can bring good shareholder returns.

The fact that the company is doing well despite the challenging business environment justifies the market’s bullish view. But growth will likely slow down next year, in line with the general industry trend. Unlike some of the leading chipmakers, Broadcom mainly serves manufacturers of communication devices, broadband receivers, and mobile phones – industries that tend to stay unaffected by fluctuations in the economy in the current scenario. The relatively high demand for chips used in such products gives the company an edge as far as long-term sales are concerned.

The company is expected to report fourth-quarter earnings of $10.28 per share, up 32% year-over-year, when it announces the results on December 8 after regular trading hours. The top line is estimated to have increased by 20% to $8.9 billion. Interestingly, earnings either exceeded or matched estimates in each of the trailing ten quarters. 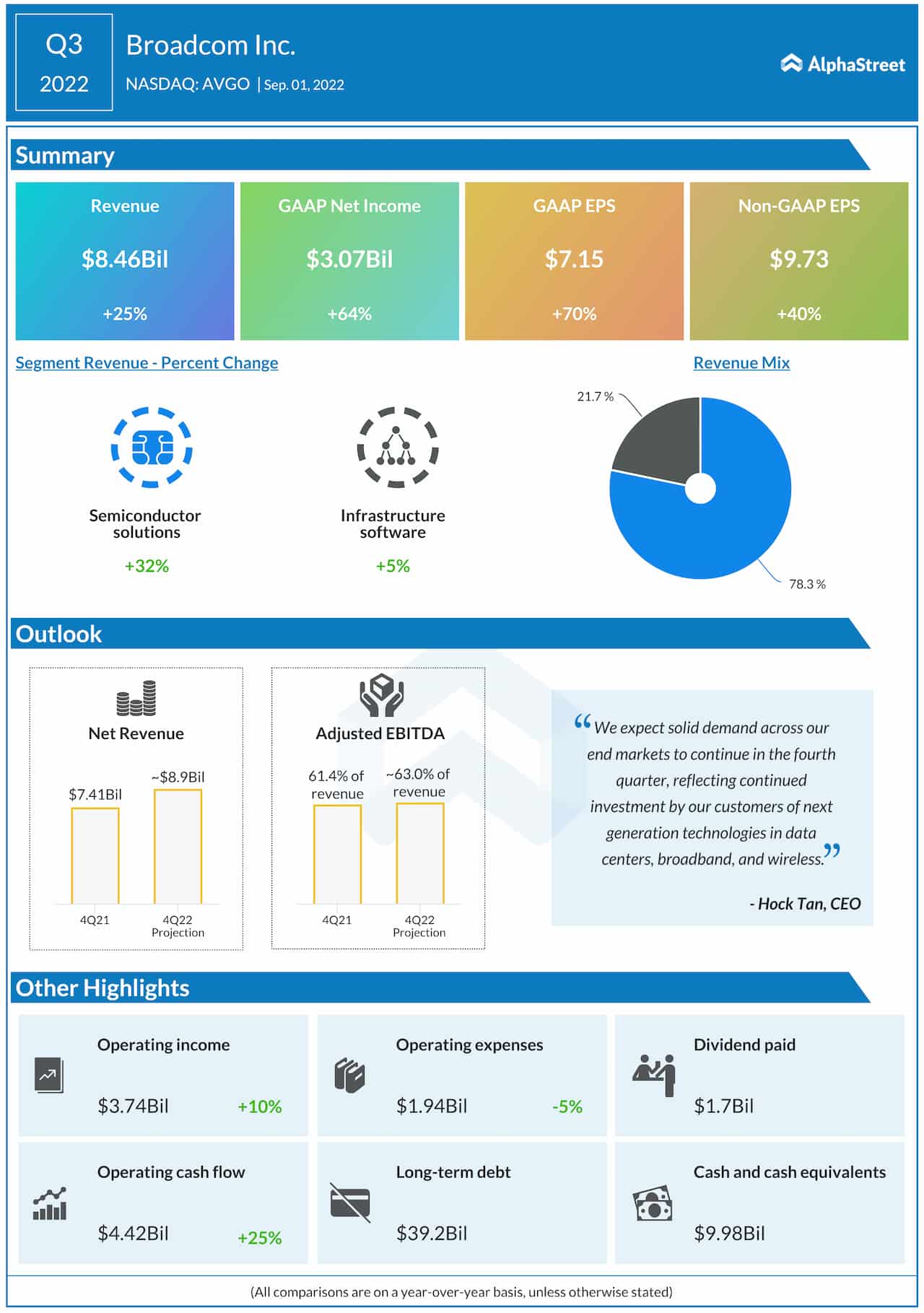 By adding VMware to its fold, Broadcom looks to boost its software business significantly. The $61-billion deal has been approved by the stakeholders of both companies and is expected to close early next year. Post-buyout, the Broadcom Software Group will rebrand and operate as VMware.

“We remain excited about our acquisition of VMware and continue to be impressed by their world-class engineering talent, as well as strong customer and channel partnerships. We have tremendous respect for what VMware has built, and together, we will enable enterprises to accelerate innovation and expand choice by addressing the most complex technology challenges in this multi-cloud era,” said Broadcom’s CEO Hock Tan at the post-earnings conference call.

Broadcom’s semiconductor solutions business, which accounts for more than three-fourths of total revenues, grew sharply in the September quarter. That translated into a 25% increase in net revenues to $8.5 billion and a 40% growth in adjusted earnings to $9.73 per share.

After ending the last trading session lower, AVGO made modest gains early Tuesday. It has been maintaining the uptrend ahead of earnings since recovering from a near-two-year low earlier this month.