Pharmaceutical giant Johnson & Johnson (JNJ) reported a 12.6% increase in sales to $20 billion for the first quarter of 2018 as domestic sales grew 6.1% and those from international markets improved about 20%. The increase in worldwide revenues was fuelled by strong pharmaceutical sales led by cancer drugs Imbruvica and Darzalex.

Net earnings fell slightly to $4.4 billion or $1.60 per share compared to the prior-year period. After adjusting for certain special items, net earnings amounted to $5.6 billion, or $2.06 per share, beating analyst expectations. 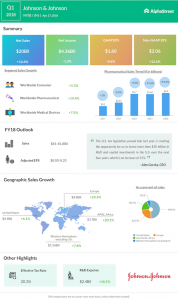 Blood-cancer treatments Imbruvica and Darzalex saw revenue growth, excluding currency, of 35% and 64% respectively while rheumatoid arthritis medication Remicade came under pressure with an 18% drop in sales.

The tax reform has given the company an opportunity to raise its R&D and capital investments in the US by 15% over the next four years. Johnson & Johnson is also planning to restructure its global supply chain in order to generate as much as $800 million in annual pre-tax savings by 2022. The consumer products firm also expects to relaunch its baby care business later in 2018.

During Q1 2018, Johnson & Johnson completed the acquisition of software-enabled surgery technologies developer Orthotaxy S.A.S. The company also received an offer of about $2.1 billion for its LifeScan business from private investment firm Platinum Equity.

The tax reform has given the company an opportunity to raise its R&D and capital investments in the US by 15% over the next four years.