A significant challenge faced by consumers of healthcare insurance across the world is lack of transparency on the part of insurance providers concerning coverage of medical expenses. For patients, this adds to the unpleasant experience of hospitalization.

It’s a widely known fact that insurance firms use various tactics to save cost, and one of them is to exclude select drugs and healthcare services from their packages. Demanding unreasonably high co-payments for expensive clinical procedures is another practice that amounts to the denial of rightful benefits to patients.

Of late, pharmacy benefits managers — the third-party administrator of prescription drug programs for commercial health plans — have come in the firing line of the drug industry for not transferring patients the discounts they negotiate, even as drug prices keep rising.

The emerging trend of consolidation among pharmacies and health insurance companies brings hope to the stakeholders as it could bring a positive change to the industry. 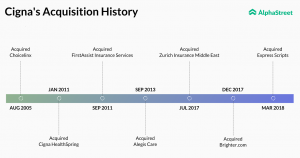 In the latest such deal that could help ease the pressure of high healthcare costs, health insurer Cigna Corp (CI) has revealed plans to acquire pharmacy benefits manager Express Scripts Holding Co (ESRX) for $52 billion, in a combination of cash and stock. In addition, the deal includes Cigna’s assumption of about $15 billion in Express Scripts debt.

The deal is a sure indication that the healthcare sector is gradually embracing vertical consolidation. Integration of pharmacy and medical claims is considered as an effective strategy that would help increase preventative services in hospitals.

Express Scripts has been under pressure ever since its leading customer Anthem Inc, another health insurer, accused the company of overcharging and initiated steps to launch own pharmacy-benefits management unit.

The merger, between the largest drugstore chain in the US and the third-largest health insurer, is viewed as the prelude to a major change the healthcare sector is about to witness.

Meanwhile, a merger bid by the country’s two leading health insurers — Anthem and Cigna — failed last year after it was denied antitrust clearance.