Darden Restaurants Inc. (DRI) posted its results for the second quarter on Tuesday, Dec. 18, before the opening bell. The LongHorn Steakhouse owner reported a 4.9% rise in consolidated sales of $1.97 billion. Net profit beat estimates at $115.9 million or $0.92 per share, up 29.6% on a reported basis and up 26% on an adjusted basis.

Analysts, on average, expected the company to post earnings of $0.91 per share on revenue of $1.98 billion for the three-month period.

Last week, Darden’s board of directors declared a regular quarterly cash dividend of $0.75 per share on its outstanding common stock, payable on Feb. 1, 2019 to shareholders of record at the close of business on Jan. 10, 2019.

US same-store restaurant sales grew just 3.5% for Olive Garden and 2.9% for LongHorn Steakhouse, as corresponding traffic fell — something that translated to the lower-than-expected top line. 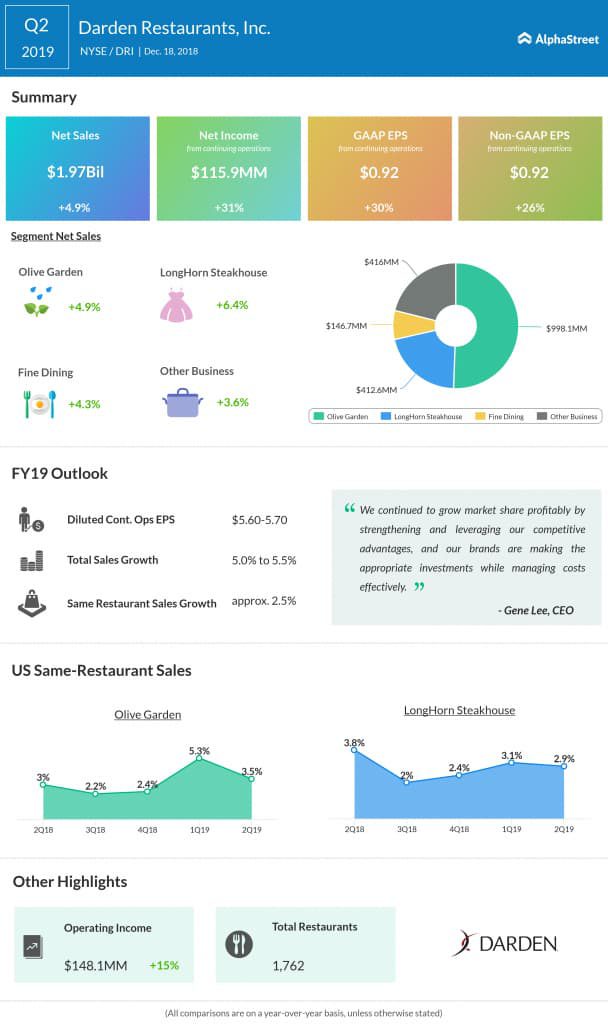 During the quarter, Darden repurchased about 0.6 million shares for a total of $61 million. At quarter-end, the company had about $419 million remaining under the current $500-million repurchase authorization.

The Olive Garden-operator also updated its fiscal 2019 forecast for same-restaurant sales growth to about 2.5% and its outlook for diluted net earnings from continuing operations to $5.60-$5.70 per share.