As you recall from our first episode on healthcare, we took to Sansa Stark’s experiences to see how the industry approached deals. This time, we cover the fan favorites — media, entertainment, and telecom.

The media industry, along with telecom, decides the flow of our communication and information. In other words, these guys can control what we watch. So what will we get to watch?

Topping the list right now is the humungous acquisition-to-be of 21st Century Fox by Disney for over $50 billion. Disney plans to purchase Fox’s film studio, TV division, cable networks and its international network stakes. That means bringing Pixar, Marvel, Star Wars, the X-Men, the Avengers and much more collectively under one banner. Think about how much Disney’s movie division would make out of this combination. It would be like that ’60s classic track by The Turtles, ‘Happy Together’:

No, seriously. Disney is already a giant, and this deal will make it bigger. Will it turn out to be a Big Friendly Giant? Not so sure. The Justice Department will keep a sharp eye on this one. The deal might get approved but not without a few tugs-of-war.

The DoJ has been pretty tough on AT&T. After pulling the plug off of the proposed Time Warner deal, the telecom giant is understandably miffed. Earlier, AT&T was barred from acquiring T-Mobile and T-Mobile was stopped from merging with Sprint. (Do check out our Game-of-Thrones style take on telecom giants, BTW.)

While the internet pioneer struggles, there are others who are teaming up without much trouble. Meredith Corporation acquired Time Inc., Comcast picked up DreamWorks Animation, and Discovery Communications is all set to finalize its merger with Scripps Network Interactive. (Cue, Turtles track in the background.) 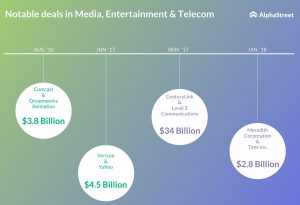 Verizon, meanwhile, picked up Yahoo’s internet business after quite some muss and fuss. The terrible data breaches, the reduction of deal values and so on and so forth. The dust seems to have settled down now, and Verizon is moving on with new plans. Oh, they have acquired a cybersecurity startup called Niddel, by the way. After all, one can never be too careful.

Then we have CBS and Viacom who were rumored to be considering a merger, or in their case a re-merger. With titans like Disney, Fox, Time Warner all opting for comfy partnerships, the idea to reunite seems profitable and necessary. (Talk about peer pressure!)

Who all make it through and how this turns out for consumers in the long run, is something we’ll have to wait and watch.