A few months ago, Apple (AAPL) achieved an enviable milestone when its market value crossed the $1-trillion mark. However, the iPhone-maker could not enjoy that distinction for long as Amazon (AMZN) soon caught up with it and joined the trillion-dollar club.

While both the companies took a beating in the recent tech selloff, losing significant value, rival Microsoft (MSFT) remained relatively unaffected. The result – after pushing Amazon to the third position, Microsoft is currently closing in on Apple to become the most valuable Wall Street firm. 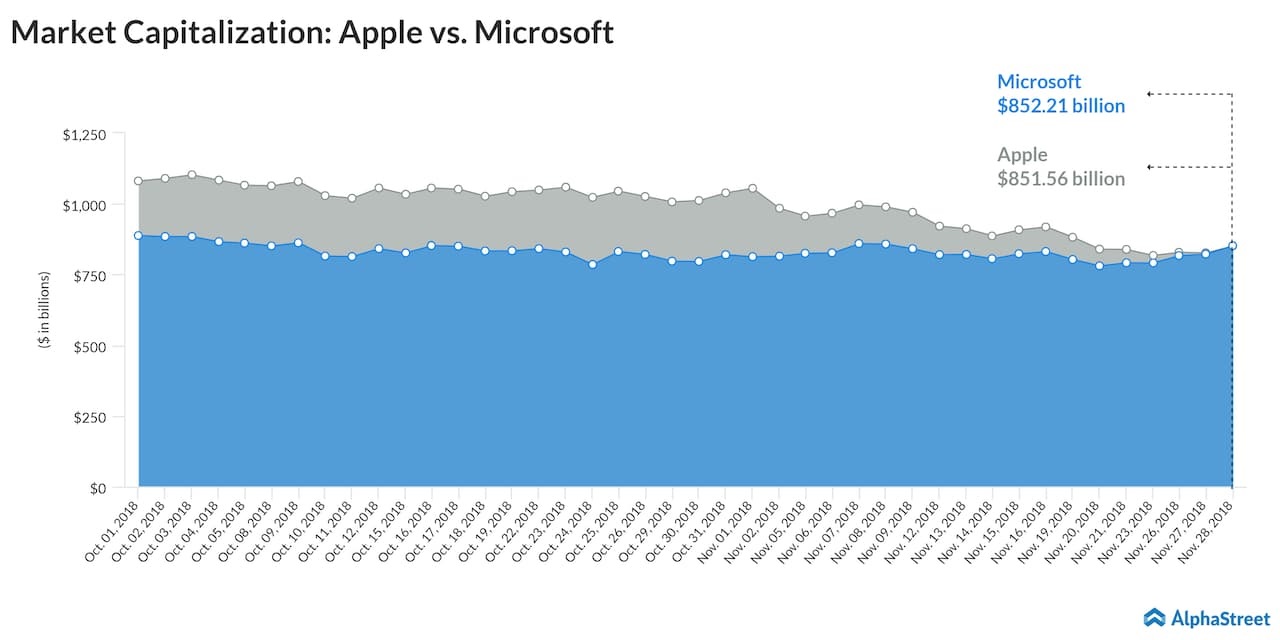 Even as technology stocks, in general, continue to stay in the bear market, hurt by growing investor concern over rising interest rates and the ongoing trade dispute between Washington and Beijing, Apple emerged the biggest loser hurt by the falling iPhone shipments and the dismal outlook ahead of the holiday season.

After pushing Amazon to the third position, Microsoft is currently closing in on Apple to become the most valuable Wall Street firm

Meanwhile, Microsoft has secured buy rating from the majority of analysts, with the only exception being a couple of neutral tags. Having retreated from the recent peak, the stock is currently out of the correction territory, a position that is favorable for potential investors.

At about $835 billion, Microsoft’s market cap in the early trading hours of Wednesday was broadly at par with Apple (AAPL), which at times slipped to the second position. Microsoft gained 23% since the beginning of the year and maintained the uptrend since last week, after recovering from a three-month low.

The gap between the two companies narrowed considerably after Apple suffered a jolt earlier this week amidst concerns over the Trump administration imposing import duty on devices produced in China. However, the stock regained momentum when trading started Wednesday, paring most of the recent losses. It was a tie when the previous session ended, with both the companies closing at $814 billion.

Though high-growth sectors like technology continue to benefit from the positive business sentiment and growing economy, they remain vulnerable to political headwinds like the trade war. It will not be easy for Apple to regain its lost glory considering the slowdown in the demand for iPhone globally and the sanctions against China, where a major chunk of Apple’s devices are manufactured.