Satellite TV provider Dish Network, which once maintained its dominance in the TV households, is now battling a tough competition from video streaming services like Netflix and Hulu, despite a strong contribution from its over-the-top internet television service Sling TV. The impact of shrinking subscriber base is quite evident even in the latest fourth quarter results.

The entire Pay-TV domain is suffering. The growing interest in cord-cutting has impacted the Douglas County Dish Network even more when compared to other Pay-TV providers. The company reported just over 7% drop in its fourth quarter revenue to $3.48 billion from $3.75 billion a year ago. However, profit surged in the final quarter of 2017, mainly due to the income tax benefit of about $1.2 billion from the recent tax reform.  Earnings stood at $2.64 per share compared to $0.73 per share during the same period of 2016.

However, Dish continues to lure its customers back to its Pay-TV services by offering the so-called ‘skinny bundles’ through Sling TV. 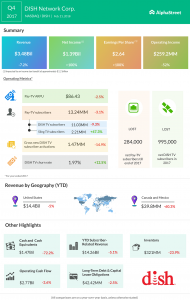