Earnings preview: A strong Q4 could lift Foot Locker above its yearly high

Foot Locker (FL) is scheduled to report fourth-quarter 2018 results on March 1, Friday, before the opening bell. The retailer of athletic shoes and apparel is projected to report earnings of $1.37 per share on revenues of $2.16 billion.

Following months of weakness, the company is now slowly getting back on track to resume the rally that got squashed in mid-2017. The New York City-based firm had reported strong results in the trailing two quarters, and investors will be looking forward to a repeat of that. 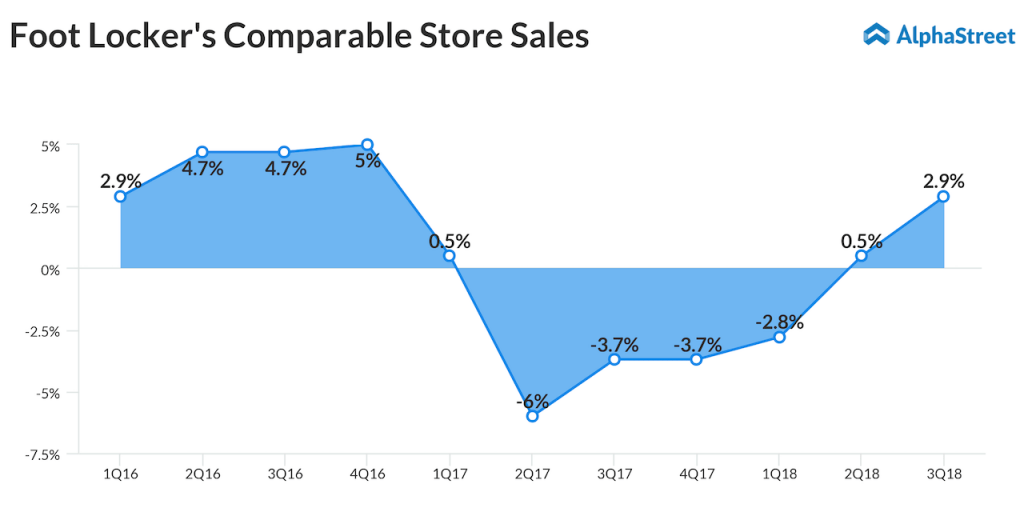 The solid results during the quarter had prompted the management to raise its guidance for comp sales to a low-to-mid single digit for the fourth quarter. If the company pulls off this feat, it would give assurance to shareholders to stay invested.

Meanwhile, like its peers, Foot Locker has been troubled by its increasing selling expenses. To some extent, the company has streamlined it by efficiently managing its inventories and offering discounts that don’t hurt its margins. However, the rising need to invest in the supply chain, as well as its digital platform, is likely to hurt the bottom line once again.

Additionally, there is a requirement to remodel or revamp its existing line of physical stores.

Foot Locker had earlier predicted that SG&A expenses as a percentage of sales could grow in the fourth quarter by 100 to 120 bps.

The stock has increased by 24% in the past 12 months and is currently trading near a yearly high. Foot Locker has a 12-month average price target of $65, which is at a 10% upside from its last close on Tuesday. Strong Q4 results could push the stock beyond its 52-week high.

Foot Locker stock surged over 10% after the company reported third-quarter earnings and sales that exceeded analysts’ views.  The company had reported earnings of $0.95 per share on revenue of $1.86 billion.