Earnings preview: What to expect from Disney’s Q2 results?

The Walt Disney Company (NYSE: DIS) is scheduled to report its second quarter 2019 earnings results on Wednesday, May 8, after market close. Analysts expect earnings to decline 13.6% to $1.59 per share while revenues are expected to drop 1% to $14.4 billion. Looking at the past four quarters, the company has topped earnings estimates in three of them.

The second quarter had some major highlights. Disney completed the acquisition of 21st Century Fox’s assets and in the process became the majority stakeholder in the streaming service Hulu. Disney also announced that it would launch its own streaming service, Disney +, in the US on November 12 this year.

This acquisition has provided Disney with a rich trove of content and a massive advantage in the marketplace. Updates on Disney’s strategy and progress with regards to these assets is an area to keep an eye on. Another area of strength is ESPN+ with its rapidly expanding subscriber base and updates on this space are also key.

Disney has been making significant investments in its business units and these could lead to higher revenues in the Parks segment. Although the Studio segment is likely to benefit from the hit movie Captain Marvel, it might not match the performance of the Black Panther which released at the same time last year.

The higher investments are also likely to lead to higher costs that could in turn weigh on the bottom line results for the second quarter. Overall, Disney might not disappoint with its second quarter results.

In the first quarter, Disney topped market estimates for revenue and earnings. Revenues of $15.3 billion were flat with the year-ago quarter while adjusted EPS declined 3% to $1.84. 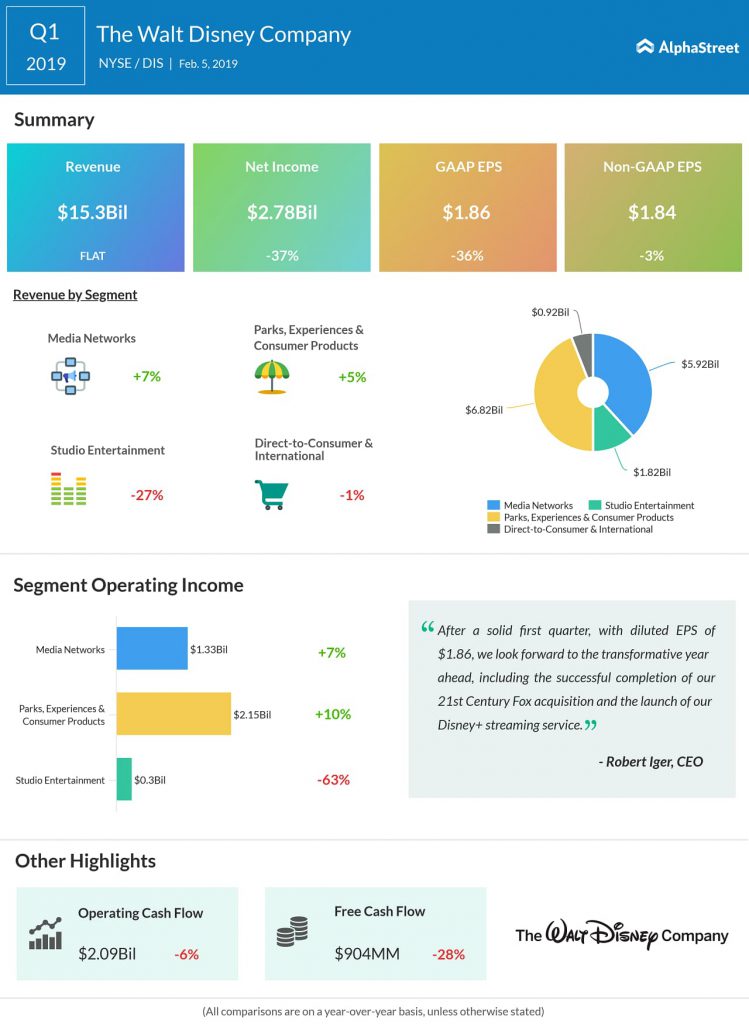 Disney’s shares have gained 25% so far this year.