America’s largest low-cost carrier, Southwest Airlines (LUV), reported third-quarter operating revenues of $5.57 billion, up 5.1% year-over-year, despite being weighed down by the rising fuel prices. The higher revenues, combined with a cut down in the federal income taxes, helped the company post adjusted earnings of $1.08 per share, up 16.1%. 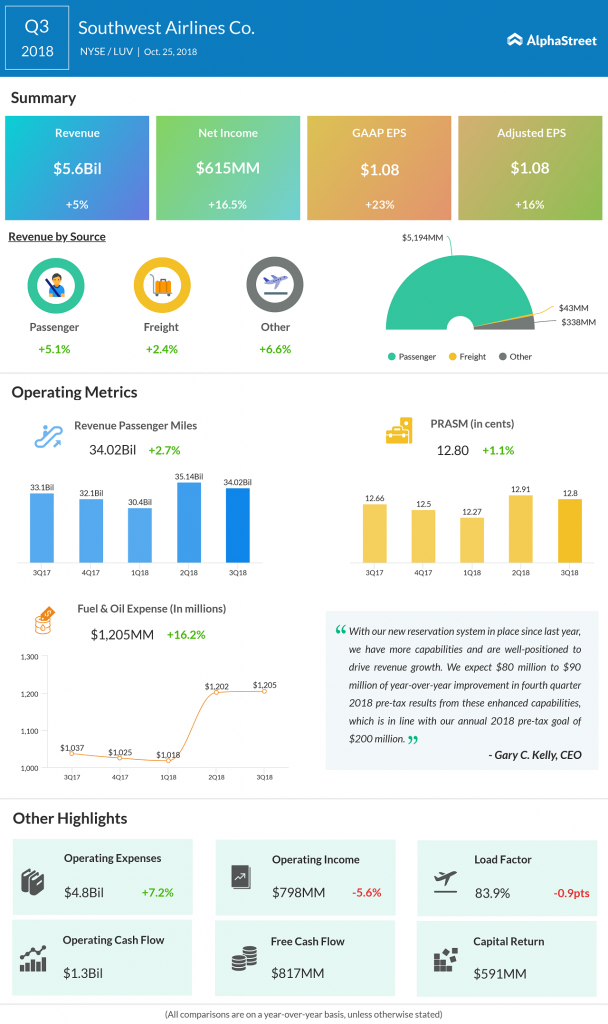 Analysts had, on an average, expected the company to post earnings of $1.06 per share on a revenue of $5.56 billion.

CEO Gary C. Kelly said, “Based on our second half 2018 revenue trends, we are well-positioned for year-over-year unit revenue growth in 2019, with easier year-over-year comparisons in first half. We also will continue to experience year-over-year unit cost inflation in 2019, excluding fuel and oil expense and profit-sharing expense, of at least 3%, as we continue investing in and deploying new operations, technology, and airport infrastructure to support future growth.”

While revenue per available seat mile (RASM) edged up 1.2% during the quarter, passenger yield gained 2.3%. The company also reported that passengers paid 2.5% higher fares to use its services, compared to last year.

The company added that it sees 1% to 2% growth in RASM in 2018. Capacity growth for this period is estimated to be around 4%.

LUV shares were trading in red during pre-market trading on Thursday. The stock has dropped about 17% so far this year.