Southwest Airlines (LUV) successfully weathered the turbulence caused by rising gasoline prices and the recent accident involving one of its planes, and reported above-consensus earnings for the second quarter. Following the impressive results, the company’s stock gained nearly 4% in early trading Thursday.

At $5.74 billion, revenues were 0.2% higher compared to the second quarter of 2017. A decline in passenger revenues owing to a 0.9-point drop in load factor was more than offset by a 10% gain in other revenues, aided by the company’s rewards program. The top line suffered a $100-million impact from losses associated with the fatal aircraft crash.

During the three-month period, revenue passenger miles and available seat miles advanced 2.2% and 3.3% respectively from the corresponding period last year.

“Despite higher fuel prices and the expected effects from the Flight 1380 accident, we delivered solid financial results, including record earnings per share for second quarter 2018. I am especially proud of the heroic efforts of our People to address and overcome the challenges resulting from the accident,” said chairman Gary Kelly.

In the June-quarter, the company returned $593 million to shareholders by way of stock repurchases and dividends.

The management is hopeful that the impact of the accident would subside in the third quarter, when the ongoing recovery in demand is expected to drive profitability. Considering the high fuel prices, the company is currently taking steps to control costs and drive efficiency.

Southwest shares, which declined nearly 20% since the beginning of the year, rose sharply following the earnings release. 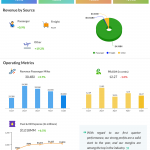