What to expect from General Electric Q4 earnings results

Many investors who picked up General Electric (GE) stock at dirt cheap prices are looking forward to the fourth quarter results, in hopes of seeing signs of a turnaround under the leadership of new CEO Larry Culp Jr. However, we would advise stockholders to keep their spirits low, as Q4 is unlikely to spring up any surprises in this regard.

In fact, there are numerous challenges facing the once-glorious manufacturing giant as it heads towards the fourth quarter results, scheduled to be reported before the market opens on Thursday, January 31.

Street consensus calls Q4 earnings at 22 cents per share on revenues of $32.01 billion, a modest year-over-year increase of 2%.

GE stock has plunged 46% in the past 12 months as the company struggled to focus on core industrial operations by jettisoning other businesses, irrespective of their profit making abilities.

Culp has been accelerating his predecessor John Flannery’s strategy of selling unwanted assets and using the proceeds to reduce its $115 billion debt burden. The plan is working well so far; the divestiture spree is going on at a slow but steady pace. But the problem is, the businesses it is hoping to retain are currently facing various headwinds slowing their growth.

Rival Siemens had last month dismissed hundreds of gas turbine employees citing weak demand across the globe. It won’t be long before this industry-wide weakness catches up with GE’s power unit.

Though the Aviation and Renewable Energy units are relatively strong, it needs to be seen how much these two segments are able to offset the weakness in power.

In the last reported quarter, General Electric missed analysts’ expectations and slashed its dividend for the second time in a year’s time.

The quarterly dividend was cut from 12 cents a share to 1 cent, beginning 2019. The company added that the dividend cut would help the company retain as much as $3.9 billion of cash a year.

Revenues during the quarter fell 4% as the contribution from the power segment tumbled 33%. 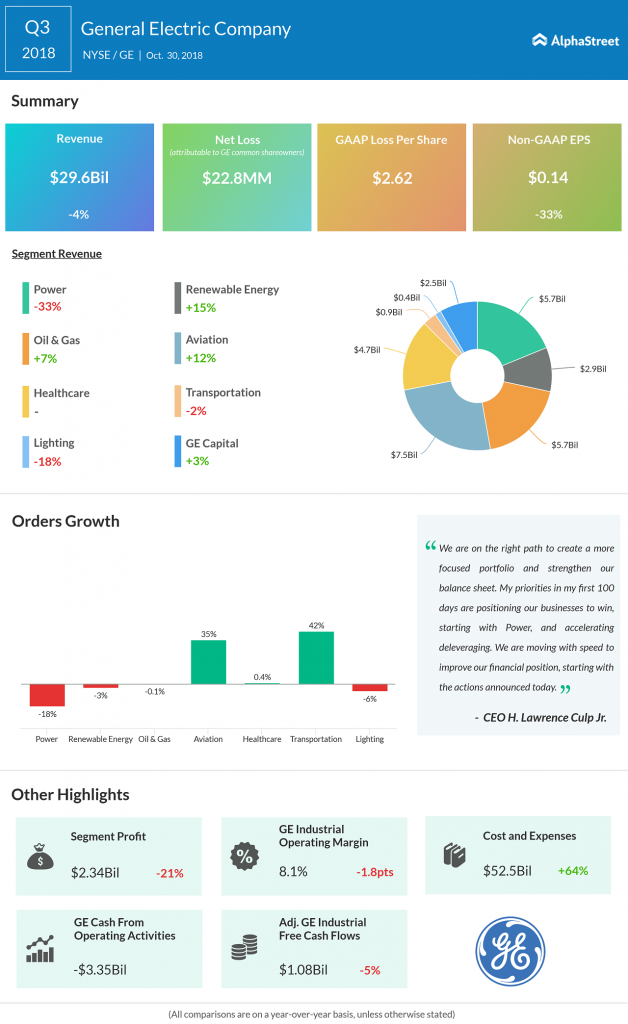