Goldman Sachs (Nasdaq: GS) will be reporting its first-quarter results Monday before the openings bell. The investment banking giant is estimated to have had a muted start to the year, with analysts predicting a 28% fall in earnings to $4.97 per share. The bearish view is in line with the consensus forecast for a 10% fall in revenues to $9.07 billion.

Like most of its peers, the continued weakness in trading business remains a cause for worry for Goldman. After registering a double-digit decline in the previous quarter, trading revenue is likely to decline further in the to-be-reported quarter. The ongoing recovery of the capital market might not help as the trading volume and overall activity remained subdued in the initial months of the year, hurt by economic volatility and the government shutdown. 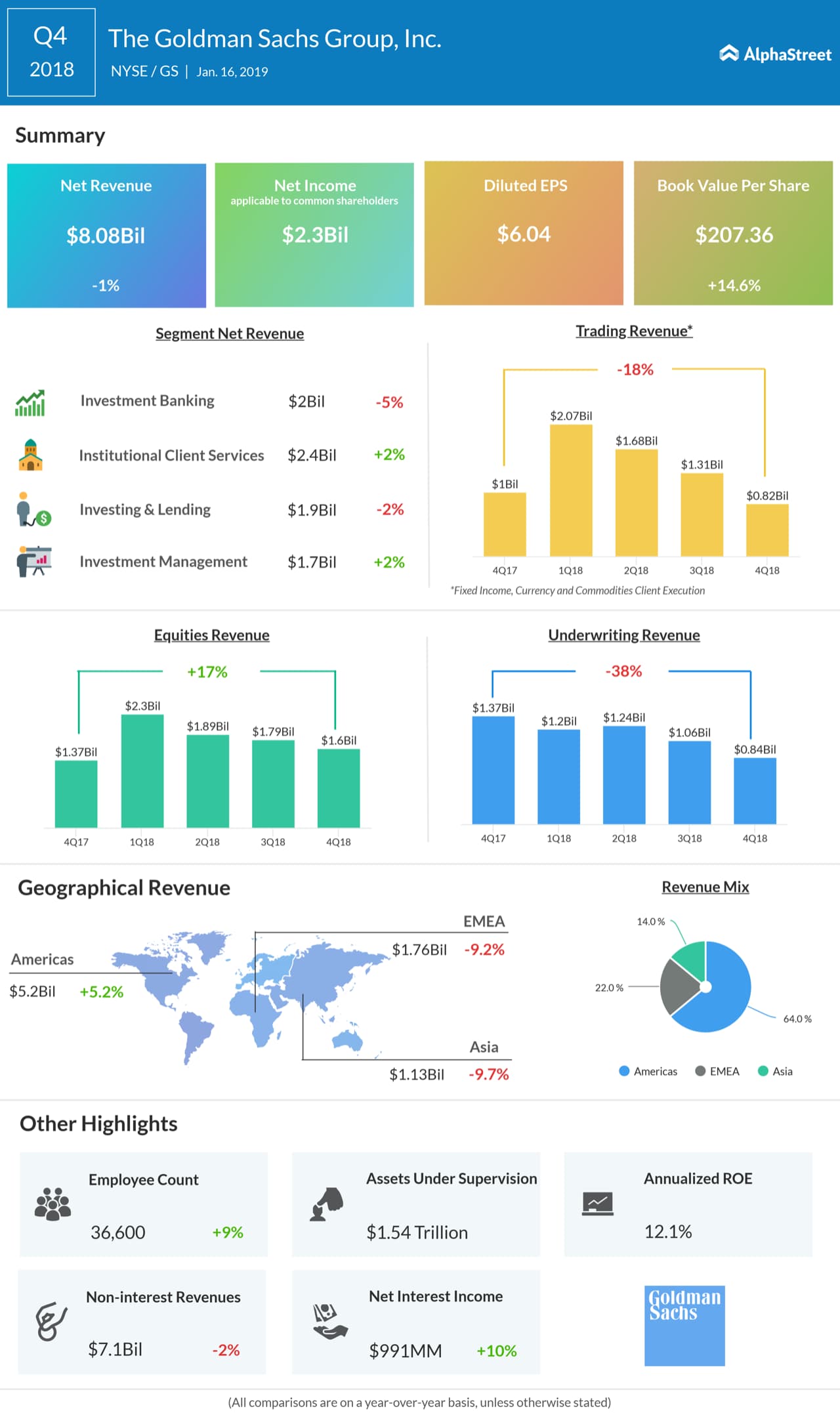 Initial estimates indicate that Goldman’s Investment Banking business is yet to recover from last year’s downturn. Despite the bank’s market-leading position in the segment, its performance has been negatively impacted by geopolitical uncertainties like the unresolved trade war and slowing global economy.

After registering a double-digit decline in the December quarter, trading revenue is likely to decline further in the first quarter

However, the drag on the top-line from the underperforming segments will be moderated to some extent by the stable performance of the Investment Management division and an improvement in the Investing and Lending unit, supported by the higher interest rates and growing demand for corporate credit.

The New York-based bank registered a modest decline in revenues to around $8 billion in the fourth quarter when an improvement in Institutional Client Services was more than offset by a decline in the Investment Banking business. However, earnings rose to $6.04 per share and topped the estimates aided by lower income tax provision.

Wells Faro (WFC) and JP Morgan (JPM) will be kicking off the season’s financial earnings on Friday before the opening bell, reporting their first-quarter results. Among others, Citigroup (C) is scheduled to unveil its March-quarter numbers on April 15 in the pre-market hours.

The majority of the analysts following Goldman’s stock recommend ‘hold’, with an average price target of about $196. In December last year, the stock plunged to the lowest level in more than two years but regained strength in the following months. The shares gained 18% so far this year.

Investment management firm Charles Schwab Corporation (NYSE: SCHW) has stayed largely unaffected by the coronavirus crisis, rather it managed to tap into new opportunities. The company owes its impressive financial