Banking giant Goldman Sachs (GS) on Wednesday smashed past analysts’ estimates for the fourth quarter. The company reported quarterly earnings of $6.04 per share, surpassing the street projection of $5.15 per share. Revenues of $8.08 billion were higher than analysts’ expectation of $7.9 billion.

Shares jumped 3.1% during premarket trading. In the trailing 52 weeks, the stock has tumbled 30%. 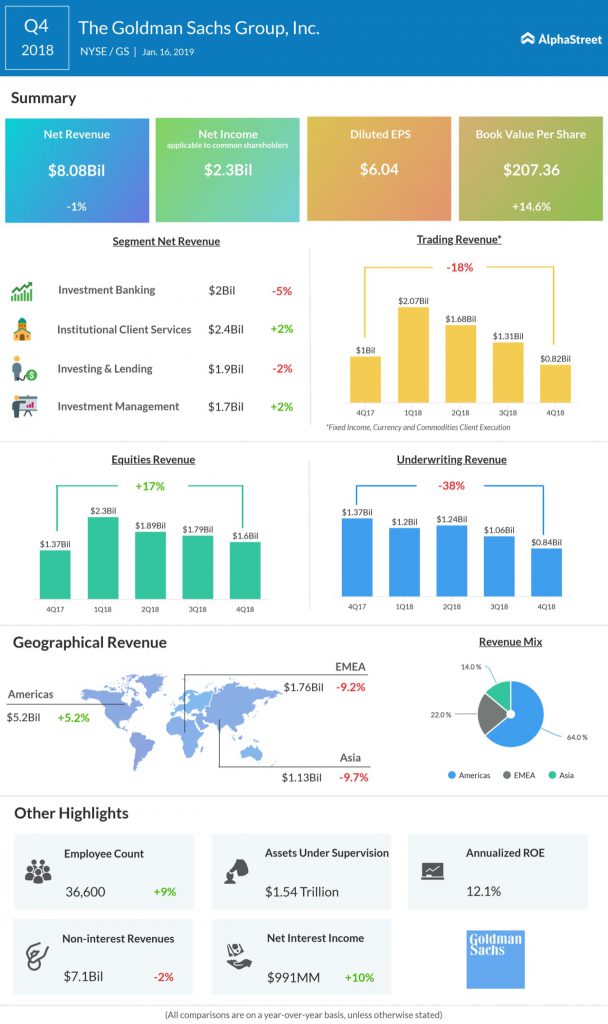 Net revenues in Investment Banking unit were $2.04 billion in Q4, down 5% from last year, hurt by unfavorable fee structure. Underwriting revenues also took a hit as companies delayed fundraising activities for the market to stabilize. Meanwhile, in the Institutional Client Services segment, revenues increased 2% to $2.43 billion.

CEO David Solomon said, “For the year, we delivered double-digit revenue growth, the highest earnings per share in the firm’s history and the strongest return on equity since 2009. We are confident that we are well positioned to support an even larger universe of clients, continue to diversify our revenue mix and deliver strong returns for our shareholders in the years ahead.”

The company is reportedly planning to introduce cash management services for corporate clients by next year, as part of enhancing its revenues to meet the performance goals for 2020. The management is likely to give more updates on this during the post-earnings conference call.

The banking industry has so far seen a lackluster earnings season. On Monday, Citigroup shares fell 1% after its top line missed analysts’ expectations. This was followed by JPMorgan Chase (JPM), which reported its first earnings miss in over four years, sending the stock down by 2.4%.

BlackRock earnings fall short of estimates in the fourth quarter

Meanwhile, despite beating estimates, Wells Fargo (WFC) also saw its shares fall as the company said the sanctions slapped by the Federal Reserve would continue until the end of the year.