Operating cash flow climbed about 17% in the fourth quarter, helped by a one-time tax benefit and a dip in working capital

The persistent demand for network bandwidth got bigger after the virus outbreak, as digital technology became an integral part of everyday life. Recovering from the initial slowdown, telecom companies like Verizon Communications, Inc. (NYSE: VZ) are preparing to tap the unfolding opportunities in communication.

While the recent dip in valuation offers an investment opportunity, experts are divided in their views on Verizon’s stock due to the lingering uncertainty. However, there is no doubt the stock would remain an investors’ favorite in the foreseeable future, thanks to the company’s value creation and strong fundamentals. In short, VZ will not disappoint long-term investors.

Having adapted to the new market conditions, with enterprises and customers taking to digital platforms for business transactions, Verizon is busy preparing itself for the new era and it is quite natural that one of the main focus areas is 5G. The company expanded its 5G service to a number of new markets in the past few months and the process is continuing. It is estimated that Verizon’s 5G services, including the Ultra Wideband, are currently available in 2,700 cities in the U.S.

The New York-headquartered company sees a great opportunity in the public sector, with various governments outlining major network infrastructure projects to keep pace with the rapidly changing cyber ecosystem. It is planning a countrywide expansion of the fiber infrastructure and densification of the wireless network to manage future traffic demands. The strong liquidity position should help in meeting the expansion goals. Cash flow climbed about 17% in the final months of the last fiscal year, helped by a one-time tax benefit and a dip in working capital.

“Partnerships remain a critical component of our value proposition. We recently added Discovery to our list of existing successful partnerships, which includes Apple and Disney. As the early cohort of Disney+ customers has come off of the initial free 12-month period, more than two-thirds have maintained their subscription, either through their Verizon direct billing relationship or by opting in to one of our newest Mix & Match plans with the Disney bundle included,” said Verizon’s chief executive officer Matthew Ellis during his interaction with analysts at the post-earnings conference call this week.

The COVID-induced strain on Verizon’s finances eased in the most recent quarter, with adjusted earnings moving up 7% to $1.21 per share on flat revenues of $34.7 billion. The bottom line came in above analysts’ prediction, as it did in each of the previous three quarters. Though there was decent customer growth during the fourth quarter it fell short of expectations, weighing on investor sentiment. 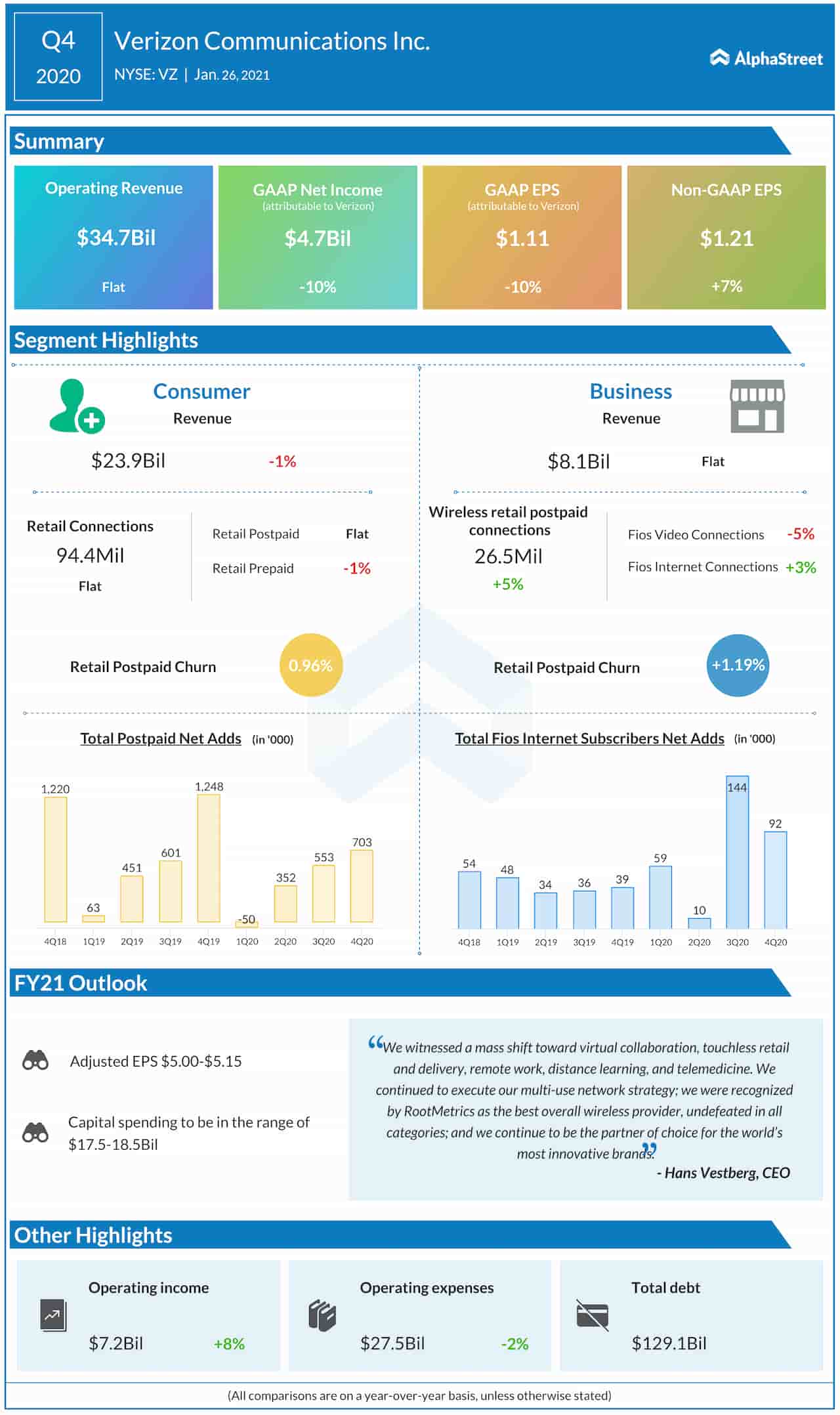 Meanwhile, online activities across the East Coast were affected by a massive outage on the Verizon network Wednesday, crippling business operations and other internet-based activities like virtual learning. Other networks were also impacted by the snag that was caused by a fiber cut.

After entering 2021 on a promising note, Verizon’s stock hit a rough patch and is down 4% since the beginning of the year. Currently, it is trading much below the record highs seen more than a year ago. On Wednesday, the stock opened slightly above $56 and traded lower in the early hours of the session.