Shares of HEXO Corp (TSX: HEXO; NYSE: HEXO) plummeted to a new yearly low today after the company reported preliminary results for its fourth quarter and fiscal year ended July 31, 2019. Hexo stock, which closed at $3.68 yesterday, was down about 18% and hit a fresh low ($2.89) within a  few minutes after the market opened. The Quebec, Canada-based cannabis company also withdrew its previously announced FY20 outlook.

“Fourth quarter revenue is below our expectation and guidance, primarily due to lower than expected product sell through,” said CEO Sebastien St-Louis. 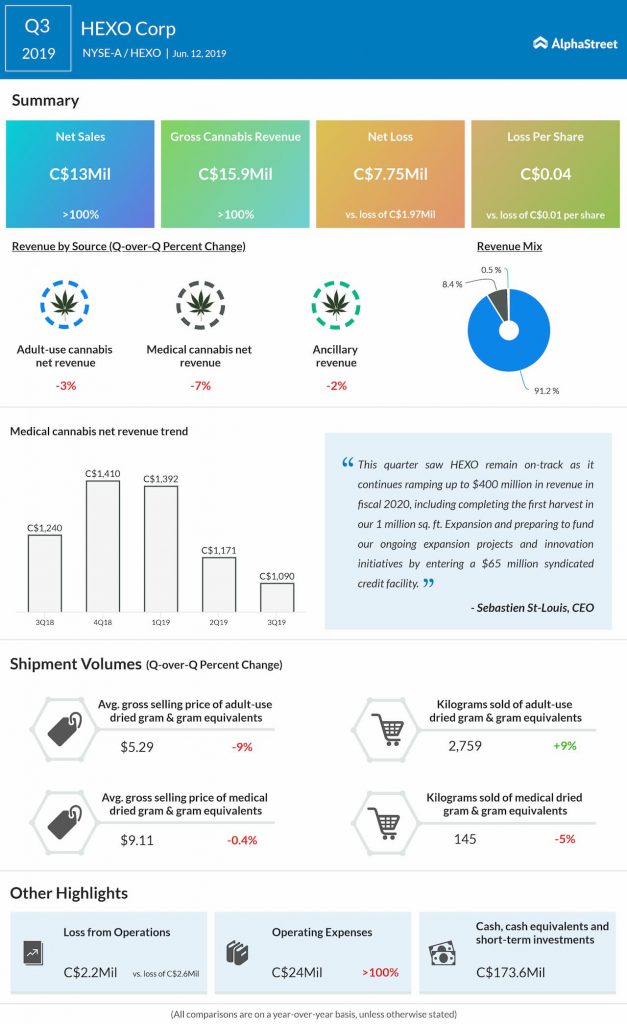 For the third quarter of 2019, HEXO’s net loss expanded to CAD0.04 from CAD0.01 per share in the third quarter of 2018, hurt by increased expenses and taxes. Sales in 3Q jumped to CAD13 million from CAD1.2 million in the prior-year quarter. When reporting third quarter results, HEXO had projected fiscal 2020 net and gross revenues from the sale of cannabis in Canada to be over CAD$400 million and CAD$479 million, respectively.

“Withdrawing our outlook for fiscal year 2020 has been a difficult decision,” added St-Louis. The company withdrew its FY20 outlook, hurt by the delay in retail store openings in the major markets, regulatory uncertainty across the pan-Canadian system and jurisdictional decisions to limit the availability and types of cannabis derivative products.

It’s worth noting that Michael Monahan, who was appointed as CFO of HEXO on May 28th this year, stepped down from his role last Friday. The company also announced that Stephen Burwash, who is the current Vice President of Strategic Finance, has been named as the new CFO.

HEXO is expected to publish the final results for the fourth quarter and fiscal year 2019 on October 24, 2019, before the market opens.