With hardly a week after activist investor Elliott Management revealed that it had bought a 4% stake for $1.4 billion in eBay (NASDAQ: EBAY), the e-commerce giant is slated to announce its Q4 2018 earnings results after the bell. Investors will be interested in knowing about the company’s future plans in response to the revival plan suggested by the activist hedge fund.

Investors seem to be more gung ho about Elliott’s stake purchase in eBay. The stock price surged 7% last week post the announcement touching new four-month high. For the fourth quarter, analysts are expecting eBay’s top line to be $2.87 billion, up 9.7% over $2.61 billion reported last year. Adjusted earnings is expected to increase 15% over last year to $0.68 per share.

The company reported better-than-expected results in the third quarter aided by strong growth in merchandise volume. Q3 revenues increased 6% to $2.65 billion and gross merchandise volume (GMV) was up 5% touching $22.7 billion. Adjusted EPS jumped 19% to $0.56 while reported earnings doubled to $0.72 per share. 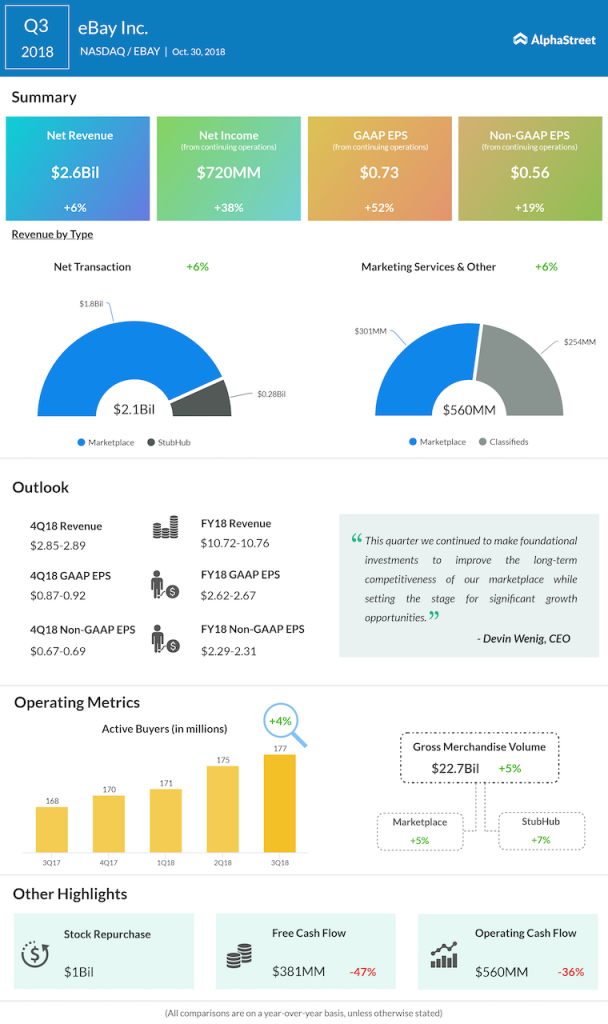 Elliott wants eBay’s management to focus on its core Marketplace offering and sell off its non-core businesses StubHub and Classifieds properties. This would help the e-commerce firm to unlock value from these two assets resulting in improving valuations. The company can also turn its attention fully on its core Marketplace business post selloff to tackle competition.

Even though eBay has been a pioneer on the e-commerce front, it hasn’t been able to cope up with nimble peers like Amazon (AMZN) and Walmart (WMT) and has been a laggard for a long period of time. The company’s Marketplace business itself would be a potential target for firms like Google (GOOGL) and Walmart (WMT).

Elliott also believes the stock price could jump 100% to $55 to $63 per share by 2020 if eBay focuses on rethinking about the business model, capital expenditure allocations, and other strategic initiatives to achieve this target. The company has responded to the hedge fund’s plan stating that it would look at the revival plan carefully. Investors would be expecting the management to spill more beans on this front in the conference call.

For Q4, investors will be keeping a close tab on growth in GMV and active buyer metrics. The company also has been getting a fillip from its advertising and payments platform, which is expected to be a tailwind in the upcoming quarters. Last quarter transaction revenues stood at $2.09 billion, which has been witnessing steady growth.

eBay has been investing heavily on its core platform to improve user experience and augmenting with more services to bring in more customers to the platform amidst tough competition. Despite the upbeat performance in Q3 results, the company has been hurt by weak macros which would continue to be a headwind. In addition, its dependency on non-US countries for transaction revenues would be a drag due to muted demand due to slow economic growth.

The company’s stock was down nearly 16% over the last 12 months touching the new 52-week low level of $26.01 on 26 December. However, in 2019 the stock has recovered from last year’s levels increasing 20% primarily aided by stake purchase by Elliott.