How to identify the best retailers in 2018

Retail stood out as one of the most troubled sectors in 2017.  A total of 6,955 stores shut down in 2017, according to a recent survey.  Another shocking statistic by BankruptcyData.com revealed that there have been 662 bankruptcy filings in the retail sector alone in 2017. And the ground reality is that many more retailers are expected to shutter hundreds of stores this year.

As you probably know, store closures are hardly news these days. Retailers need to offer something new every year to retain their customers, thanks to the high standards set by Amazon. 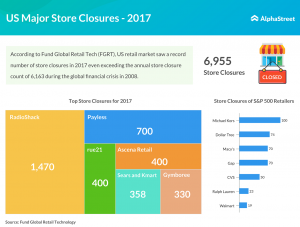 Buzzwords to measure strength of retailers

Technology is the key to survival. In order to stay with times, retailers need to either adapt to the changing technologies or lose out. Find out where your preferred retailers stand with respect to these technologies to measure their combat strength with Amazon.

It is estimated that global AI market will reach approx. $35.87 billion by 2025. Retailers worldwide have already started incorporating certain AI models, such as recommendations based on predictive analysis. Retailers now don’t have to make blind predictions anymore with regards to customer behavior as AI helps them attain accurate data.  This eventually cuts down store inventories. However, the potential for AI is mostly underutilized.

Blockchain has received substantial attention over the past few years, thanks to Bitcoin. However, this new technology of a shared digital ledger is still in its infancy. Unlike popular belief, this technology is not restricted to banking and currency. Retail industry can benefit from its lower operational costs, improved visibility and transparency in supply chains, offering customers authentic information of the product at every step. Blockchain also lowers the risk of fraud between parties tied in a contract. Research firm Aite Group predicts that investment in new blockchain-enabled financial technologies will more than quintuple over the next four years, from an estimated $75 million in 2015 to $400 million by 2019.

Initially introduced for the security sector, facial recognition today has massively expanded into other industries. Retailers, especially brick-and-mortar stores, may use this technology to track their customers’ shopping habits. The face recognition market, which is expected to generate revenue of $9.6 billion by 2022, has enormous potential in the retail landscape.

Augmented reality can be a significant sales tool for the retail sector. Last month, Amazon uncovered a new patent, Smart Mirror, which uses virtual clothing and mirror to help its customers decide what to purchase. Retailers who have already experimented with the technique have stated that it is effective in attracting and retaining customers, something that the brick-mortar-stores badly need at the moment.

Robots have been used in warehouses for quite some time now. The next step is using them in stores, in full public view. From manually fetching products and logging items, to interacting directly with customers, robots can elevate shopping experience for customers. Best Buy, Amazon and Walmart have already introduced robots in their stores. Others need to follow the suit if they want to stay in the competition.

Identify retailers who are slow at adapting to these technologies – they are at higher risk of losing out. Get hold of the ones who are ahead in this race.