INTC Stock: Intel’s problems likely to persist this year and beyond

Intel Corporation (NASDAQ: INTC) has remained a market-leading tech firm despite facing multiple challenges in the recent past and losing market share to rivals. Falling PC and smartphone sales are the semiconductor giant’s main concerns, given its strong presence in the CPU market. The management looks to tackle the current slowdown through effective cost management and capacity expansion.

After suffering continued losses since early 2021, Intel’s stock stabilized in the last few months, in a sign it has probably bottomed out. The low valuation and long-term recovery prospects should encourage those looking to invest, but the challenging market environment makes the stock a risky bet right now. As the company prepares for its fourth-quarter earnings release, the stock languishes at the lowest level in about eight years. Considering the sharp stock movements typically associated with earnings announcements, it is advisable to keep a close watch on INTC in the coming days and assess the company’s earnings performance before investing.

After a weak year, business conditions are unlikely to improve in 2023, due to economic uncertainties and the post-pandemic shift in demand conditions. At the same time, the company often fails to keep pace with fabless chipmaker Advanced Micro Devices, Inc. (NASDAQ: AMD) when it comes to providing advanced compact chips, with the latter enjoying the flexibility of outsourcing production to third-party foundries. The lack of innovation resulted in Intel losing a major customer like Apple, Inc. (NASDAQ: AAPL), which has stopped using Intel chips in most products.

Meanwhile, Intel is revisiting its business strategy to beat competition and has adopted what it calls Internal Foundry Model for establishing consistent processes and enhancing overall efficiency. The company also made a re-entry into the discrete GPU market last year after a long gap, giving competition to rivals like AMD and Nvidia Corporation (NASDAQ: NVDA). This week, Intel unveiled its 13th-generation mobile processors. These initiatives, supported by the company’s upcoming new-gen 10nm chips, should enable it to achieve the goal of returning to processor leadership by 2025. 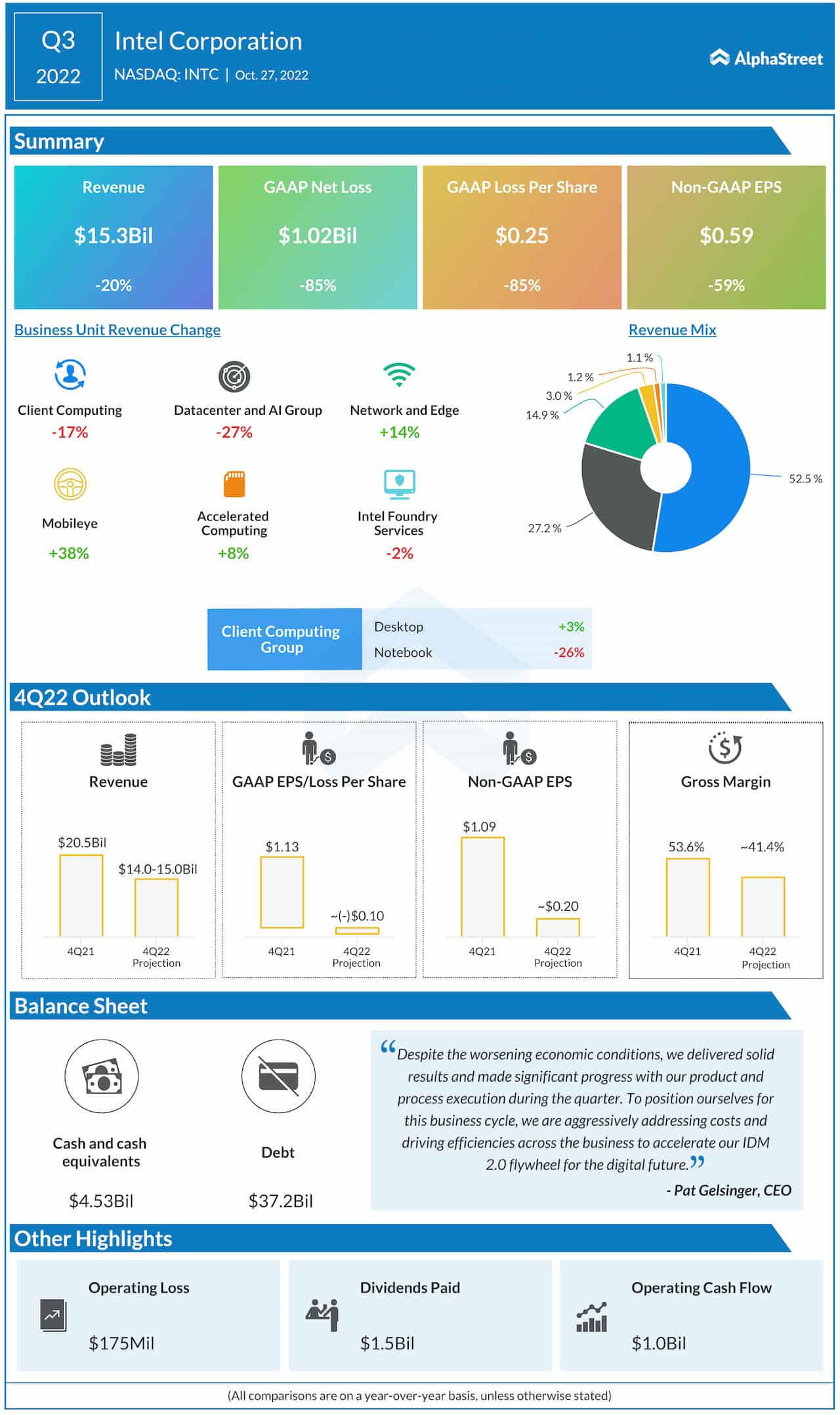 Intel delivered stronger-than-expected earnings regularly for more than seven years, except in the second quarter of 2022. The trend has been almost similar for the top line, though there were more misses. Experts are of the view that the final three months of the fiscal year were challenging for the company, with consensus estimates showing a 25% fall in revenues to $14.5 billion in the fourth quarter. Net profit, excluding one-off items, is seen falling sharply to an unimpressive $0.2 per share. The report is slated to be published on January 26, after regular trading hours.

The performance was equally disappointing in the third quarter when the main operating segments of client computing and data-center contracted sharply, more than offsetting revenue growth in other divisions. That translated into a 60% plunge in adjusted earnings. Taking a cue from the weak outcome – though the key numbers topped expectations — the management has set its fourth-quarter earnings and revenue targets sharply below the prior-year levels.

“We are responding to the current environment by taking aggressive actions to reduce costs across COGS and OPEX while mindfully protecting the investments needed to accelerate our transformation and ensure we are well-positioned for long-term market growth. In addition to reducing near-term costs, we have also identified structural cost reductions and efficiency drivers… In aggregate, our efforts should drive $3 billion in annual savings in the near-term and $8 billion to $10 billion by the end of 2025.”

Why investors should add Nvidia stock to their watchlist

Intel’s market value has nearly halved in the past twelve months as the stock remained stuck in a losing streak. But it had a positive start to 2023 and traded higher throughout Wednesday’s session.