Why investors should add Nvidia (NVDA) stock to their watchlist

In the third quarter, both revenues and profit declined year-over-year. The top line beat estimates, while earnings missed

Semiconductor companies are going through a tough time lately, with the continuing supply crunch and general slowdown related to macro issues weighing on sales. The performance of Nvidia Corporation (NASDAQ: NVDA), the diversified chipmaker that reported earnings this week, is being closely watched for it is considered an indicator of the overall health of the industry.

After establishing its dominance in the gaming and cryptocurrency markets, the company is making significant inroads into the auto industry that offers an array of opportunities. Electric vehicles — a segment that is becoming increasingly popular — and emerging technologies like self-driving require advanced microprocessors like those made by Nvidia.

Despite slipping into a two-year low a few weeks ago – though it recovered partly since then – Nvidia’s stock looks overvalued. But it is still reasonable and should not discourage investors who are looking for long-term engagement. Nvidia’s disruptive business model and continued dominance in the GPU market give it the strength to overcome adversities and get back on track.

The stock clocked its highest-ever value nearly a year ago, before entering a downward spiral and paring those gains.  It might not be the perfect time to invest in NVDA now, but it deserves to be on investors’ watchlist. 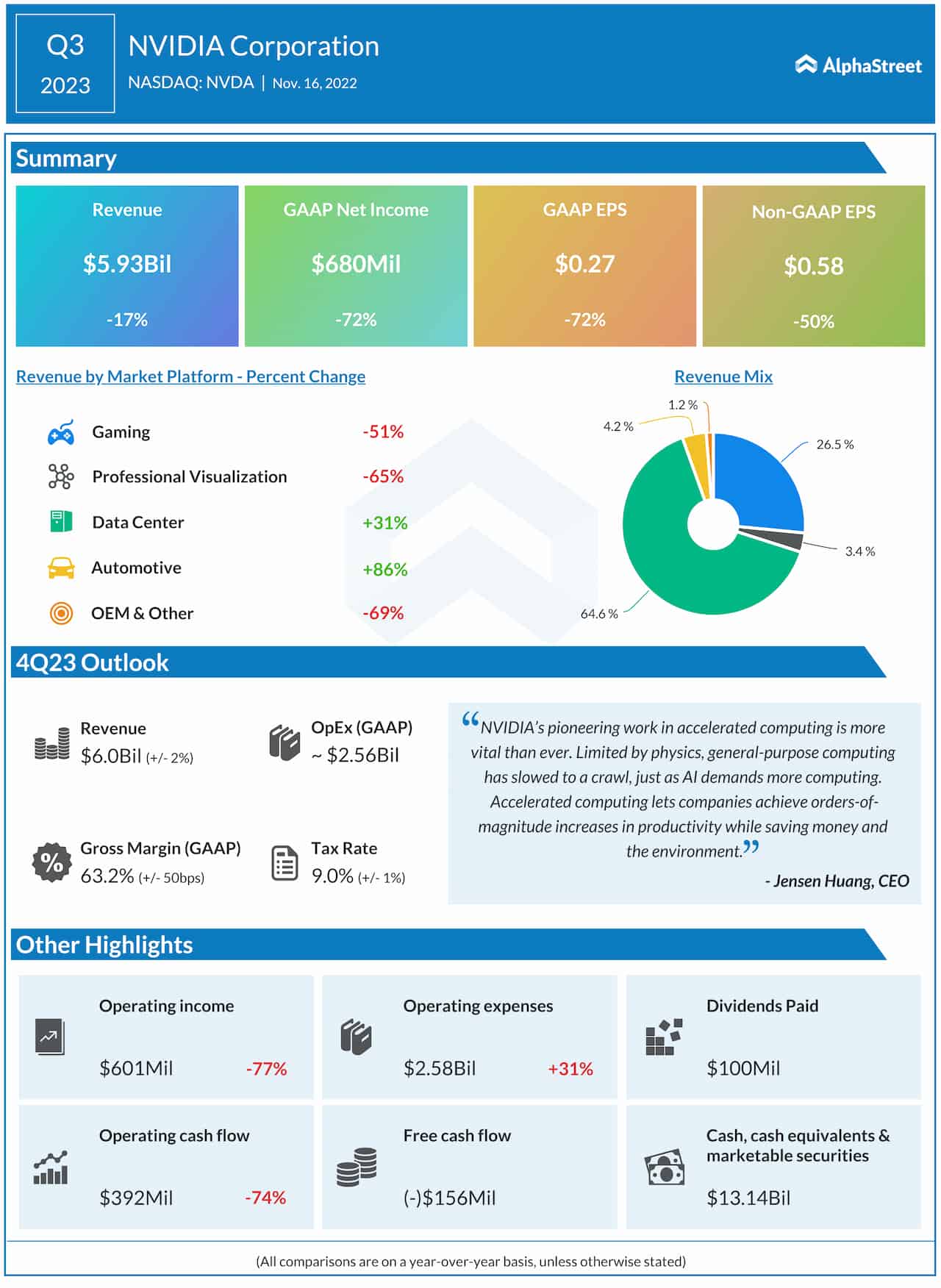 In what could be an indication of the tough environment in which semiconductor companies currently operate, Nvidia’s earnings missed estimates in the third quarter, reversing the long-term trend of consistent beats. At $0.58 per share, adjusted earnings were down 50%. In a relief for shareholders, revenues beat the forecast though the top line was down 17%, mainly hurt by a sharp fall in the gaming business. Meanwhile, the management guided fourth-quarter sales below estimates.

PC gaming has been losing steam lately as the COVID-era boom started waning due to markets reopening, and the slowdown has resulted in excess inventory. The demand slump and inventory buildup among customers made leading semiconductor firms issue cautious outlooks and slash their order guidance. On the positive side, Nvidia’s core data center business and the emerging automotive division are doing well.

Considering the company’s high exposure in the Chinese market, the economic slowdown in that country and the recent export ban are a cause for worry. But Nvidia is ramping up its chip portfolio with focus on cloud and artificial intelligence. In the third quarter, the company started shipping its flagship A 100 data center GPU based on the new hopper architecture.

“As the number and scale of public cloud computing and Internet service companies deploying NVIDIA AI grow our traditional hyper-scale definition will need to be expanded to convey the different end market use cases. We will align our data center customer commentary going forward accordingly. Other vertical industries, such as automotive and energy, also contributed to growth with key workloads relating to autonomous driving, high-performance computing, simulations, and analytics.”

The stock traded lower Thursday afternoon, as the third-quarter earnings-miss weighed on investor sentiment despite revenues beating and analysts issuing bullish outlook. NVDA is down 41% since the beginning of the year.