Trucking and logistics provider J.B. Hunt Transport Services (NASDAQ: JBHT) reported its fourth-quarter results after the bell. The firm reported mixed results as its earnings failed to beat analyst estimates due to tax-related charges whereas revenue came in line with street consensus.

The logistics firm saw a 77% drop in earnings of $0.81 per share primarily due to $134 million charge recorded for the ongoing legal proceedings with the BNSF Railway Company. Revenue increased 16% to $2.32 billion aided by broad-based growth from all divisions. It’s worth noting that analysts were expecting JB Hunt to report earnings of $1.48 per share on revenues of $2.3 billion. In the prior year period, revenue was $1.99 billion and EPS was $0.87.

On the segment performance, Intermodal (JBI) saw a 15% jump in revenues aided by improved revenue per load numbers.  This segment brings in more than 50% of JB Hunt’s top line. Dedicated Contract Services (DCS) sales increased 25% due to improvement in productivity and new fleet additions. 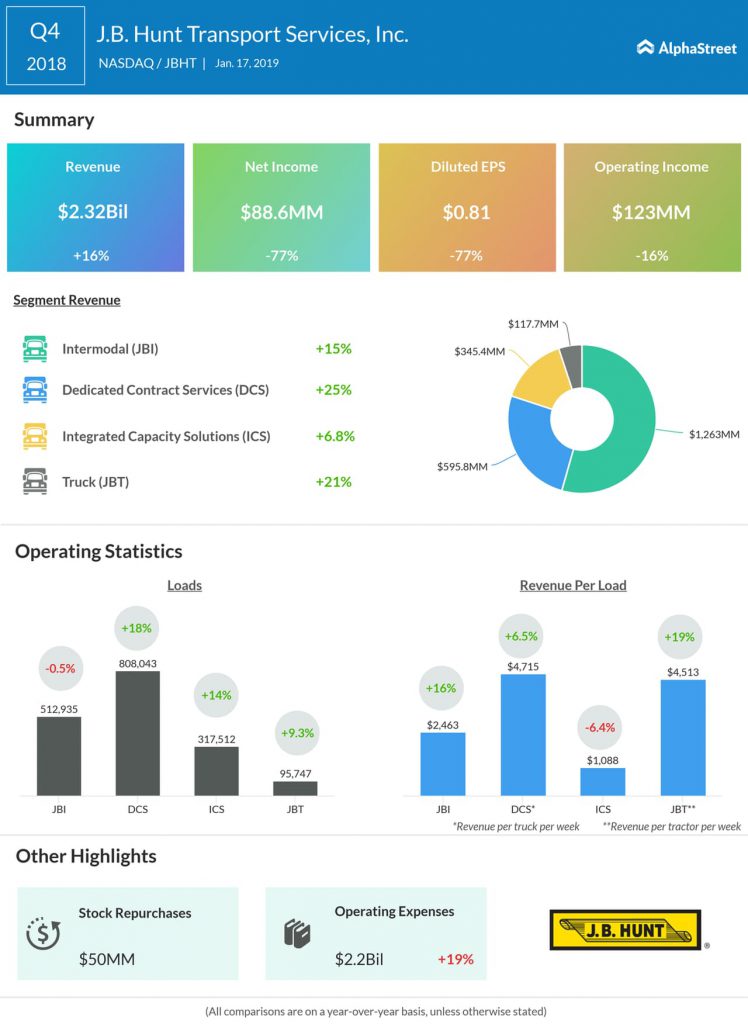 Earlier this month, the company acquired Cory 1st Choice Home Delivery for $100 million through its subsidiary JB Hunt Transport. This deal is expected to boost its last mile delivery offerings in the furniture delivery domain to its customers. DCS segment is going to benefit from this purchase in terms of expanded geographic presence and warehouses which would augur well to the top line.

JB Hunt’s shares are up 7% after the bell post the earnings announcement. Last year, the logistics firm has lost nearly 18% touching new 52-week low in December.