Loss-making Spotify looks for a turnaround through IPO

It is a rarity in the financial markets that a company goes public after it climbs the growth ladder high enough to become the market leader. The IPO filed by music streaming giant Spotify Technology on Wednesday stands out for multiple reasons – from the exclusion of underwriters to lack of lock-up period.

The Swedish firm, which is in the business for nearly a decade, has been registering losses continuously, despite being the world’s largest music streaming service with a mammoth subscriber base that is growing at the rate of about 50% annually. The company cited its weak finances and mounting competition from the likes of Google and Apple as the main motivating factors behind the IPO.

Shares of Spotify, which is touted as the next Netflix, have been trading in the secondary market for quite some time, and the growing prospects of the company’s business had given rise to speculations that it would go for a floatation this year. The highest value of the shares in private trading was $132.50, which could translate into a valuation of about $23 billion. 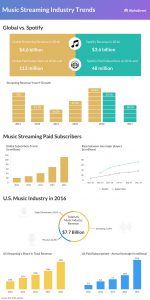 The company claims to have lost about $1.5 billion last year, despite having 159 million monthly users including 71 million paid subscribers, which is nearly twice that of Apple Music. Meanwhile, Spotify’s ad-supported free service that contributes significantly to its subscriber growth makes it a better choice than Apple.

For the company, the primary constraints for a turnaround have been falling subscription fees and inconsistencies in the royalty paid to music labels and publishers.

The Swedish firm has been registering losses continuously, despite being the world’s largest music streaming service

Pursuant to the IPO, the stock will start trading on the New York Stock Exchange under the symbol ‘SPOT’. The unconventional IPO procedure was also marked by the absence of promotional measures and lack of clarity on the stock’s price, which according to the company will be determined based on ‘buy and sell orders’ collected by the stock exchange.

Spotify said in the IPO filing that its streaming service has the potential to be expanded to more markets across the globe, from the 61 countries where it is currently operating.

The prospects for the streaming industry, which is considered to be still in its nascent stages, is very bright considering the rapid transformation online entertainment is undergoing. The fact that Spotify’s subscriber base exceeds even that of industry leaders like Netflix, as claimed by the company, puts it in a uniquely advantageous position.