Micron Technology (MU) is scheduled to post its second-quarter 2019 earnings on March 20. The question, however, is: will the semiconductor industry see a slowdown?

Looking at the market, the Micron stock has climbed 20% this year. With other chip giants such as Advanced Micro Devices (AMD) and Nvidia (NVDA) cutting their outlook in an environment post the crypto bubble bursting, we could see these effects translate to DRAM maker Micron.

In the previously reported first quarter, Micron saw a profit jump of 23%, despite a tight market.

Now, investors will be looking at a period that the Nvidia CEO Jensen Huang termed “an extraordinary, unusually turbulent, and disappointing quarter.”

Another area that Micron relies on the PC and smartphone markets. With the recent Apple (AAPL) slump, the effects might ripple and spread to the balance sheet of Micron.

But, analyzing the market, Micron’s shares have beaten the 15% climb of the industry stocks — despite the company slumping 31% in the last twelve months. 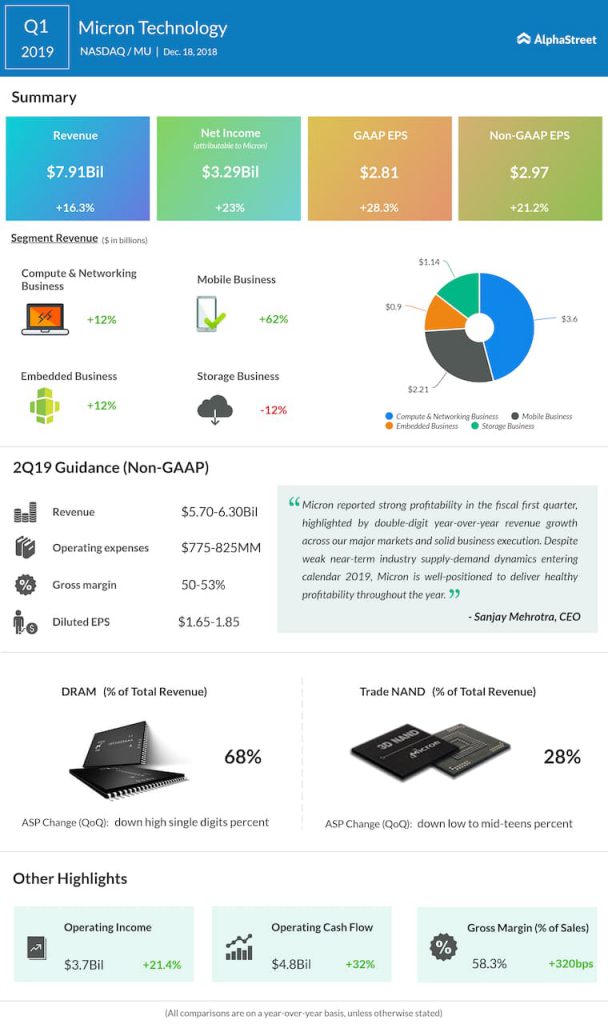 According to Zacks Research, Micron is touted to slip about 19% in second-quarter revenue to post a little short of $6 billion, with its DRAM unit revenue expected to slip further in the coming quarters.

Adjusted earnings are estimated to slump by about 39% to just $1.70 per share.

Micron could see a recovery if it beats market estimates. However, given that Nvidia stock slumped in the long-term despite upbeat results it posted last month, the market could react either way.

Earnings Calendar: Browse through our earnings calendar and get all scheduled earnings announcements, analyst/investor conference and much more! ()