Microsoft ups the ante on AI with Bonsai deal

Microsoft seems to be on a buying spree. Within 2 weeks after gobbling up code hosting platform GitHub for $7.5 billion, the company announced on Wednesday that it is purchasing Berkeley-based artificial intelligence (AI) provider Bonsai. With this deal, Microsoft (MSFT) ups the ante on the AI front compared to Amazon (AMZN), Google (GOOGL) and other tech giants, which are making faster inroads on machine learning and AI. The company hasn’t disclosed the acquisition price.

Bonsai, through its reinforcement platform, wants to democratize AI and machine learning and make it accessible for enterprises. Bonsai reduces the complexity in building autonomous platforms for its users who don’t have the AI know-how. It’s worth noting that Microsoft had already invested in Bonsai through its venture capital division M12. The AI firm has 42 employees on its rolls, and post the deal they will be joining the Microsoft Research AI group.

Microsoft plans to integrate Bonsai’s autonomous platform into Azure IoT, helping the Redmond-based firm to fill the gap in its AI offering. Now, the company can provide end-to-end offerings to its customers for autonomous deployment. It also gives the Azure provider enough ammunition to compete with its peers by providing the whole gamut of offerings ranging from basic to advanced AI solutions. 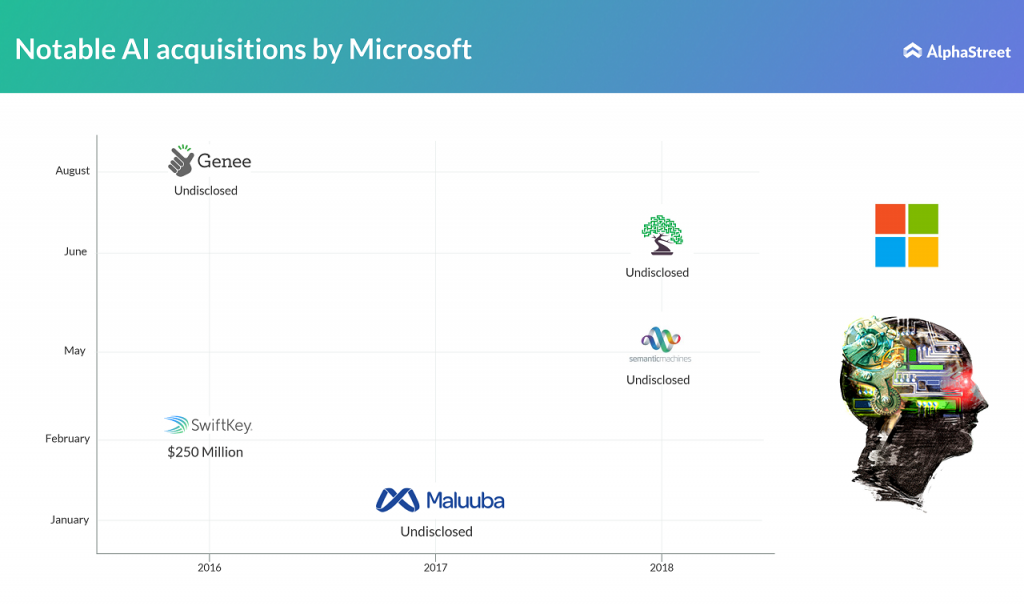 Gartner, in its recent research report in April, stated that AI-related businesses would be worth $3.9 trillion by 2022, a whopping 200% jump from $1.2 trillion expected in 2018. It also added AI will bring in disruptive changes across the board over the next decade as the companies globally look for ways to improve profitability while reducing costs to stay afloat amidst tough competitive landscape. Microsoft earlier has acquired AI-related companies like SwiftKey, Genee, Maluuba, and Semantic Machines to beef up its AI offering.